How Adolescents Use Social Media

To gain a more precise understanding of the practices and habits social media users aged 12-17, BETC Digital launched a four-month long study in which they interviewed French 12-17 year-olds about their use of social media and digital technologies. The objective of the study was to gain an understanding of this age group’s use of digital media and to identify methods for brands to more effectively interact with them. Beyond these interviews, the agency complemented the study with social listening and analysis of the online conversations of this age group.

For brands, this age group represents huge selling potential. This segment of the population is thought to have a greater purchasing power than millennials due to the fact that they have a stronger influence on the consumption patterns of their parents. Olivier Vigneaux and Sebastien Houdusse, referents on the BETC Teens study, estimate that this age group holds a purchasing power metric between 11 and 12 billion euros in France alone.

According to BETC’s study, this age group primarily simply views social media as a means of contacting their friends. The proliferation of internet security concerns over the last decade have caused strict parental control for this age group, and so their phones have become their primary method for keeping in touch with friends.

In terms of traditional internet communications, this age group views email as an administrative tool rather than a means of socializing. Facebook is also unpopular, and according to the surveyed sample, Facebook is a social network for adults. The use of digital media among this age group is somewhat organized in the sense that each social platform has its own use: Snapchat is a messaging app for sending photos, WhatsApp is often used to organize group messages or text internationally, and Facebook Messenger is used as a directory for contacting acquaintances rather than friends.

All of the surveyed sample opted to use private social media accounts.

The surveyed sample overwhelmingly reported feeling the need to preserve their privacy on social media, and that an awareness of security issues across social media exists among their peers. BETC Digital said in this regard that 100% of the surveyed sample had private-access social media accounts, meaning that only those they choose to connect with may view their content. Additionally, many of those interviewed stated that they have two Instagram accounts, one public ‘personal branding’ account, and one more personal, privatized account accessible only to their closest friends. For this age group, Instagram had become a sort of digital identity card on which they keep only their most relevant photos or those which are most liked and commented on.

This high-maintenance of social accounts has earned 12-17 year-olds the title of “power editors,” meaning that they attach great importance to the content they write and publish on social media. One of the interviewees stated that he “always [asks his] friends for advice before posting a photo.” Terminology has even been given to categorize content based upon the purpose behind its creation: “stage” content is heavily edited, and creative while “backstage” content is more raw, less heavily edited, and ‘live.’ 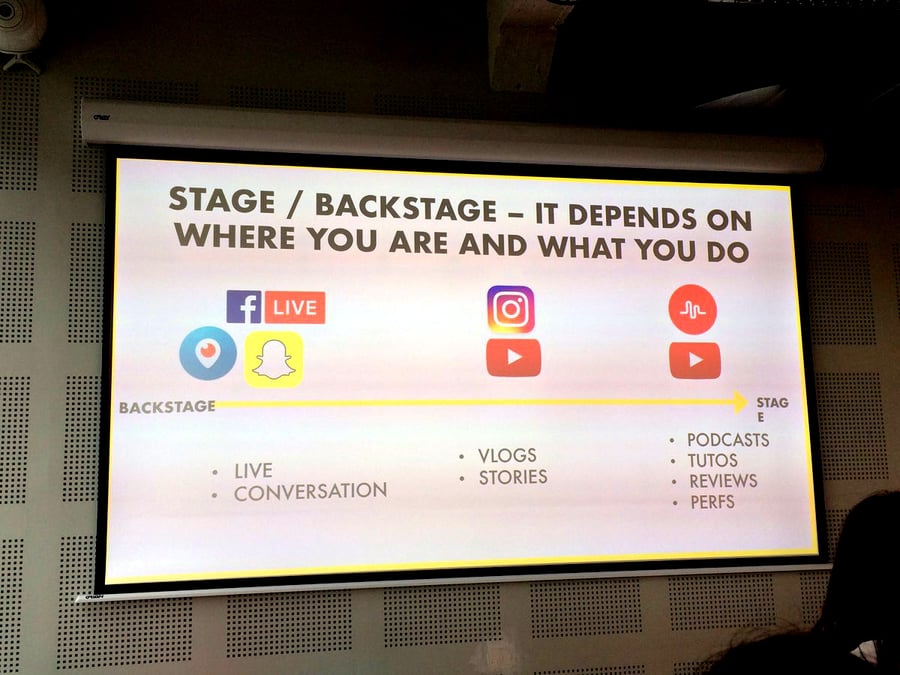 A graphic outlining examples of stage and backstage content.

This age group is very attached to the reactions of their friends on social media. The sample reported that giving and receiving likes among friends is often perceived as a social obligation. Liking and posting positive comments on a friend’s content was discussed as a greeting or symbol of friendship among the study’s population. BETC reported that teenage social media content generally has much higher engagement rates than branded content because engagement is, in some sense, considered a social mandate.

Sulivan Gwed, one of the most popular YouTube influencers among the surveyed sample.

The most popular YouTube influencers among the sample are:

BETC states that the YouTube content teenagers watch provides valuable insight into their perceptions and expectations. YouTube was not only used among this sample for entertainment but as an educational space as well. Scientific, political, and historical YouTube content is very popular among this younger generation. According to BETC’s study, 70% of the surveyed sample reported that they trust YouTubers more than traditional celebrities, viewing them as “real people who tell real-life stories.”

This age group does not respond well to advertisements on social media, and generally, do not click on ads when they appear. However, they are not opposed to targeted advertising. BETC’s team stated that the sample would prefer that marketers use their data to deliver well-targeted promotional messages rather than received irrelevant ads.

Has Covid-19 been the Most Discussed Topic in the History of Web and Social Media?
Aurelien Blaha Jul 21, 2020
The Most Discussed Brands in Q2 2020 and during Covid-19 lockdown
Aurelien Blaha Jul 14, 2020
A Social Listening Snapshot of Singapore's General Election 2020
Melissa Chue Jul 8, 2020
3 Social Media Trends And Insights On Fast Food Delivery Brands During COVID-19
Micah Levin Jun 25, 2020
Covid-19 Crisis: Helping Those on the Front Line
Paul Vivant May 14, 2020
Previous page
Next page