Social media has undoubtedly become a preferred means for individuals to express their opinions, especially when it comes to matters of public interest. Digimind recently partnered with Prisa, a global Spanish and Portuguese media group and the official public opinion aggregator for the Catalan elections to be held on December 21st.

El País, the most influential Spanish newspaper which is operated by PRISA media group, is using Digimind Social to analyze online conversations during the electoral process and its staff is crafting content based on findings before, during, and after the election.

The objective of the project is to use social intelligence to gain a panoramic view of public opinion as the event occurs, in addition to identifying the most relevant topics of discussion regarding the election. The analysis will follow English, Spanish, and Catalan conversations occurring across online and social media sources, particularly focusing on Twitter.

The period of data collection began on December 12th, and will end December 22nd, the day following the election, and has predominantly focused on the seven relevant political parties and eight candidates running.

Which candidates and political parties have generated the most buzz leading up to the election? Which issues have internet users discussed most extensively prior to voting?

El País has already reported the following data, which was collected from Twitter conversation analysis: 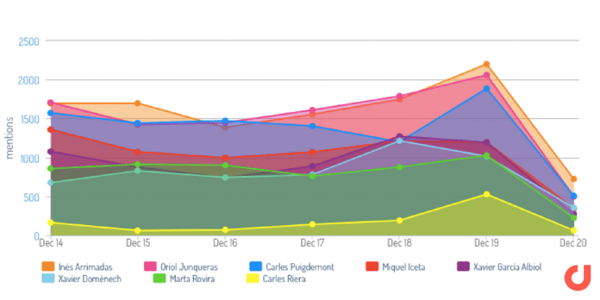 The volume of mentions by candidate over time, via Digimind Social.

Successful analysis of an event of this magnitude and popularity requires very close monitoring in real time. For this reason, it’s necessary to use an online monitoring tool which enables users to segment data and KPIs for three phases: before, during, and after an event.

Due to the large volume of mentions that public discourse surrounding an election will accumulate, using an alert system to detect critical mentions of an event is essential.

If a simplified view of data in real time is of the utmost importance, simple and structured data visualization tools facilitate easier tracking and analysis- all by creating dashboards to summarize the most significant KPIs at a glance.