**THIS ARTICLE ONLY SCRATCHES THE SURFACE FOR POLITICAL SOCIAL INTELLIGENCE. FOR AN EVEN DEEPER DIVE INTO POLITICS & SOCIAL LISTENING, CHECK OUT OUR LATEST REPORT ON THE 2020 US PRESIDENTIAL ELECTION**

Politics can be an addictive subject, heck, they don’t call them political junkies for nothing. So since many of you reading this won’t be satisfied with just following, obsessing over, and analyzing the last presidential election, we figured it’d do you some good to feed that fix with ways that, you too, can out game the best politicos come two years time when we’re inundated with news about the 2022 Midterm Elections. Using social listening tools, like Digimind, you can stay one step ahead of the talking heads through data-driven insights that reveal deeper truths regarding voter sentiment, subjects and issues of strongest importance, and political swing state preferences.

Social Listening can be equally valuable to those looking for an edge in politics, regardless of political affiliation, though you’ll need the right set of methods if you’re going to properly take the most advantage of social intelligence platforms. Below we’ll cover 5 useful ways in which you and your team can effectively glean key insights from social media, starting with…

In our previously mentioned report on the 2020 Presidential Election, we needed to unearth what was most important to voters within a specific time window, thus revealing the general mindset for wide swaths of constituents across the US. Notwithstanding the fact that most-discussed issues can range depending on two distinct issues, those being:

But broadly speaking, these efforts can evolve into useful clusters, known as “Topic Clusters”, which are necessary for finding what’s relevant to Americans, and how best to shape a narrative if you’re, say, a political advisor, or a campaign strategist looking to rebrand a poll-lagging incumbent. Suppose jobs, the economy, and climate change are most important to a certain state that you’re running in. With this social listening tool, you’re closer to determining what the majority of eligible voters want for their leaders. You could naturally craft a platform that caters to reinvigorating a dilapidated local economy with brand new green jobs, like emissions free infrastructure and car charging station projects that would be most appealing to people - broadly speaking.

A topic cluster map that used data from social media to see what’s most important to voters.

This process can also be utilized with a Topic Keyword Search as well, as demonstrated below:

A topic keyword search helps illuminate the subjects that are trending the most on conversations held over social media.

By focusing on those things that hold true significance to people online, you’re more accurately able to engage with them where they’re most likely to feel empathized with - their minds and hearts. However, calling back to those two points of complication regarding political affiliation, and trends of the moment, you can mitigate these potential obstacles by specifying certain candidates names - as evidenced in the keyword search above - to relegate the topics to mostly reflect the chosen political background you wish to study, and for the latter, you can use the next tool…

Sweet, sweet hashtags... the subconscious of the internet. Mastering the art of hashtag analysis is one thing, but having a whole list of hashtags recorded, ordered, and placed by mention percentages, can make the difference between differentiating between a regular occurrence, and a political occurrence that’s important to your research. A top trending hashtags listing doesn’t have to be limited to 10 or even 15 selections, providing you with a flexible amount of insight that can be game-changing. Always use this social listening method, as it’s important for:

For example - and just so there’s no confusion here, as we’ll be pulling from the Presidential US Election report a lot in this piece - in our report, we researched the months that led up to the final days of the election, and found some astonishingly helpful information. 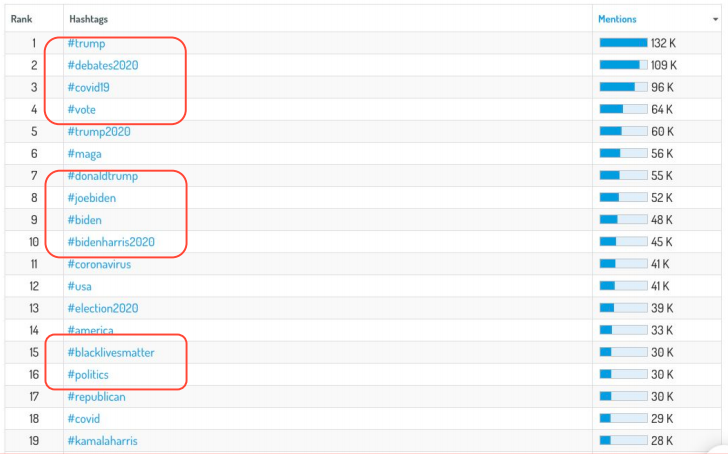 The top hashtags that caught our attention are circled in red.

In this instance, the data was collected during the weeks that preceded the presidential debates, and shows how, unsurprisingly, #trump was the most regularly mentioned topic, with #debates2020, #covid19, and #vote also trailing not so far behind. If you were on the campaign of a local city mayor, or state governor for instance, you could easily optimize your research with this necessary tool, revealing where people are at the time of searching, giving your campaign an general advantage when it came to talking points for speeches and political advertisements.

3. Conversation Mapping Shows Where In The US The Political Discourse Is The Strongest

Whether you’re running for president or not, you want to have the best knowledge available when it comes to the most politically active states. With this data at your disposal, you’re in a better position than the competition to focus on those areas where the most conversations are being held on the subject of you and your rival(s). To do this then you’ll need something called Conversation Mapping, the traditional means by which usually marketing and insights professionals better understand where the conversation is taking place on social media; for your (political campaigner) purposes this can be just as helpful.

Knowing if one state over another is discussing your favored candidate the most, or is most concerned with a leading issue for your favored candidate, can help simplify a lot of strategic campaigning for your political spending. Is Senator Bob Joe being discussed the least in Idaho? Make sure to spends the most there to remind people he’s running. Are the most negative sentiments about your running mate, Congressman Mrs. Whatsits occurring in this state of that one? Avoid wasting the political capital that could otherwise be better spent in a more receptive region. These are only a few examples of the multitude of ways you can - and should - take advantage of Conversation Mapping.

The areas of the most conversations clusters are circled in red.

Here in the example above, we can see how both the East and West coasts are where the most political discourse is being held on social media, with states like California, New York, Pennsylvania, New Jersey, Washington D.C., Massachusetts, Delaware and Maryland, all hosting a significant percentage of the keywords related to the conversations surrounding the 2020 US Presidential Election. By taking a similar route, your political fortunes could improve dramatically, and it’s important to note that this particular tool is well suited for a country like the United States of America, where by being segmented by blue, red, and purple states, you can more easily break down the place of most political advantage versus one entire country that must be more arduously broken down by more hard-to-evaluate districts, like regions, municipalities, and things called “constituent states”, like in the continent of Europe.

4. Political Sentiment Analysis Gives You A Window Into The Hearts & Minds Of Voters

We’ve all got our feelings surrounding certain issues and subjects, but especially people, who can be massively popular, or massively polarizing. Take the two subjects of our sentiment analysis, if you will: President Donald Trump, and now President-Elect Joe Biden. Both men were highly mentioned in tweets on social media, as well as posts and stories on sites like Facebook and LinkedIn. But open the hood of that political shell, and you’ll find that many people felt more or less equally on both candidates, except for a slight margin of difference for one candidate over the other. See if you can guess which one it was based on the sentiment analysis below:

Imagine having this power in your hands - being able to see in real time, the actual preferences for a candidate over another. Though this doesn’t explain why this happens to be the case, when combined with the previously mentioned tools (as well as a few others), you can at least paint a more full picture of the who, what, where, when and why, of your political environment, thus ensuring a more complete strategy when tackling a political campaign turnaround, or a reordering of campaign approach during an internal campaign crisis. There’s no such thing as a one quick fix-it-all solution, but this helpful method of social listening is darn near close to it.

Firstly, what is “Voter Intent”? Voter Intent is more or less what its title refers to, the overall likelihood of a legally registered constituent to vote for, or not vote for, a specific candidate - presidential or otherwise. By harnessing the data from various sources, you can acquire quite a deal of vital information that, at least at the time of scrying, can tell you much about the eventual outcomes for specific states. This method was relied on for our 2020 US Presidential Report, and if offered quite a bit in the way of state-by-state analysis.

For this voter intent research effort, the battleground states of Arizona, Florida, Georgia, Michigan, Minnesota, North Carolina, Pennsylvania, and Wisconsin, were all quantified for their insightful takes for whom the voters did and didn’t, would and wouldn’t vote for, between Joe and Donald.

Imagine if you were a data journalist, trying to come up with a predictive article on the outcome of the election. If you had this information at your fingertips, you’d be able to deliver four things to your readers: 1) that more people planned for Biden than Trump (the outcome of the 2020 US Presidential election confirmed that for us), 2) less people intended to vote for Trump, 3) more people claimed they would not vote for Trump than not for Joe Biden, and lastly 4) Florida would eventually end up being quite a kingmaker this time around (something that was also confirmed with the outcome of the Electoral College after everything was accounted for during the 2020 US Presidential Election).

Never underestimate the power of Social Listening for any data-reliant field that you wish to score an advantage in. Politics, like marketing, is a world of statistics after all. Anyone who needs to seriously consider a role in something like a political campaign or a firm that advises politicians on their chances to win seats in the House, Senate, or Executive branch, as well as local positions like city councils and mayoral positions, all need to accept the importance of social intelligence.