There are many types of crises that professionals of all stripes have to deal with when operating within the marketplace. If you work on a crisis management team - usually as a Public Relations (PR) Manager - then you have a better understanding than most as to what it takes to avert, specifically, brand crisis. By using Social Listening, and the most innovative risk management practices, you can position your company or business in such a way that you’re less likely to suffer heavy losses or have to handle a drop in engagement - or even worse, a spike in negative engagement online - for your brand.

There are two means of engaging in crisis management:

Three if you count the process of damage control itself. For all avenues of crisis management however, you’ll need your sword and shield, your fire extinguisher, your trusty first aid kit; I’m talking about the right tools for the job - and in this case, that means social listening. Social listening is one of the most important forms of risk management you’ll have in your arsenal as a marketer or public relations professional, if only for the ease of use, power of digital reach, and proven effectiveness in detecting potential threats that can turn your world upside down.

A social listening tool, like Digimind, can offer teams the necessary social media monitoring power to perform the necessary steps to identify potential risks, analyze crucial data related to said impending trend, and formulate the appropriate countermeasures that will either prevent or mitigate the damage caused by something like the spread of bad word-of-mouth, or a serious issue with a product or service that needs to be addressed.

Let’s take a real-life example of Mitigation that was enacted by Apple in 2010.

Maybe you recall this incident for the latest iPhone release - iPhone 4 - that caused a furor among customers on social media who complained about recurring reception problems related to a suggested user design flaw regarding the WiFi receiver being blocked by the customer’s fat fingers, thus limiting their commercial use.

Apple came to the conclusion, after multiple complaints were delivered to their customer service outlets, both on and offline, ultimately running some tests and discovering that indeed some devices would suffer moderate loss of WiFi reception when held a certain way. Once this was determined the company had already sold millions of units to customers, and faced a veritable tsunami of condemnation for unknowingly (or perhaps even knowingly) selling compromised iPhones to consumers. Thus they determined that the issue could be overcome through the application of a phone bumper - a rubber band that bordered the body of the iPhone 4 - and thus remedied - for the most part - the issue at hand.

To appease those voices that could’ve been paid attention to much sooner, Apple initiated a free iPhone 4 case plan for those that had an Apple account and could prove proof of purchase for their iPhone 4’s through Apple or one of its designated service providers. Even though a company as large and financially sound as Apple could easily eat the additional expenses of doling out free merch for their brand’s health, a hit like this could’ve easily been altogether avoided if they had just done some social media listening in the first place.

An example of risk management in the other direction: prevention, involves an intensive usage of social media monitoring like trend tracking. Trend tracking is traditionally used by brands and businesses to ascertain what the future holds for a particular industry, like technological innovations, consumer sentiments, or just plain old shifts in marketplace attitudes. It can also be used as a crisis management plan, but to such a degree where the intended goal is to quash a potential problem before it even gets an opportunity to rear its ugly head to make problems in the first place.

Take another example than with this kind of crisis management plan: JetBlue.

JetBlue was one of many airlines affected by a major ice storm on the US continental east coast back in 2007. Layovers caused many passengers serious headaches, with some early departers shuttled off to motels or overnight airporting. Seeing the writing on the walls, and understanding the messages that many people were conveying to the world on social media, JetBlue enacted a JetBlue customer’s “bill of rights” that included monetary compensation and actions that the airline would take in order to make sure their loyal customers remained positive when considering the JetBlue brand.

For all intents and purposes, the corporate decision was a success, mostly preventing mass consumer migration to other airlines within the travel and hospitality industry, and maintaining a strong brand-consumer relationship despite the “act of God” (an industry term used by companies to exonerate themselves of any wrongdoing, negligence, or responsibility, by shifting the ultimate blame on unforeseen or unavoidable circumstance, like a storm or freak accident).

Let’s take a look at just one of those tools as users of social listening platforms are (at least with Digimind) entitled to most of the social listening services previously mentioned, rather than just one or a few, as you can’t do a fully comprehensive social listening query for crisis management, without acquiring a complete 360° review of the brand, competitors, and overarching industry that those brands thrive in. Also, for the sake of everyone’s time, and out of respect for your patience, we’ll keep things short and sweet while giving you a solid understanding of how things are all connected!

So what is Brand Reputation? Good question, it’s the use of data to determine what the general overall sentiment is when it comes to brands. Taking shoe and sports apparel for example, we can see in the image below using data derived from social listening via Digimind, various metrics that include mention percentage, good vs neutral vs bad consumer sentiment, and more. 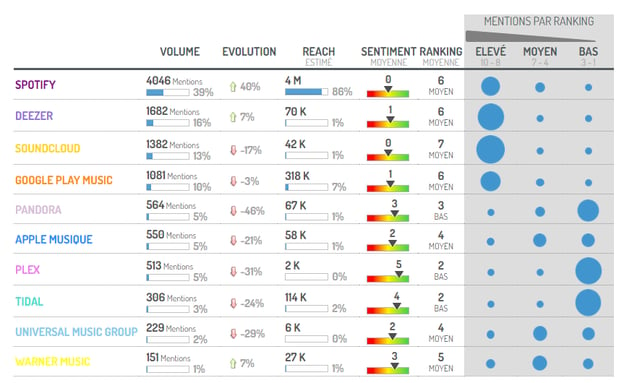 Brands like Nike, Adidas, Under Armour, Reebok, and New Balance, are compared to each other to see which brand is doing best when it comes to brand reputation.

Marketers can use social listening - and more specifically brand reputation - to better understand how they’re viewed, and how to address shortfalls in their brand image. This is a vital key to making an effective crisis management strategy that will ultimately decide whether or not a company like Adidas and Reebok, can avert a brand crisis, given how so many people mention and speak highly of Nike, their industry rival.

Some things in this world are just simply unknowable, and it’s our jobs to prepare as well as humanly possible so that when the storm does come, there’s a roof over our heads and an umbrella in our hands. The argument that one doesn’t need social listening or a crisis management strategy doesn’t factor in the immortal words that most PR pros and marketing wizards need to keep close to their hearts: “better to have it and not need it, then not have it and need it”. Your brand deserves the best kinds of protection you can afford, and doing anything less is putting your business at risk when the proverbial s@#$t hits the fan.