The concept was simple enough - boot up your hard drive, turn on your computer desktop screen, open your AOL internet browser while enduring that obnoxious dial-up sound before finally arriving at “PizzaNet”, and ordering two medium pepperoni pizzas with a side of garlic bread and a 2-liter bottle of Tab Cola. Within minutes a delivery person would be at your door with all your food ready - the age of fast food delivery was upon us. Pizza Hut blew the minds of consumers back in 1994, with the utilization of that new fandangled “World Wide Web” to facilitate business transactions between itself and its customers, and today it’s only gotten bigger.

To say that nowadays the novelty of fast food brands adopting delivery options en masse is simply small potatoes (or in this case french fries) would be a massive understatement; with the practice in and of itself having grown into a $94 billion industry in 2019 alone, and experts estimating a 9% a year growth each year, the industry is on track to eating up $134.5 billion more by 2023.

Since the pandemic, this industry has exploded in both size and discussions online, with social media conversations mentioning a few key brands more than others. Clearly people have a lot to say about fast food delivery and it’s worth taking note. Digimind alongside Socialbakers covered this social media explosion in our recently released comprehensive report on Stay-At-Home Industries, and numerous brands included spiked heavily online, such as: 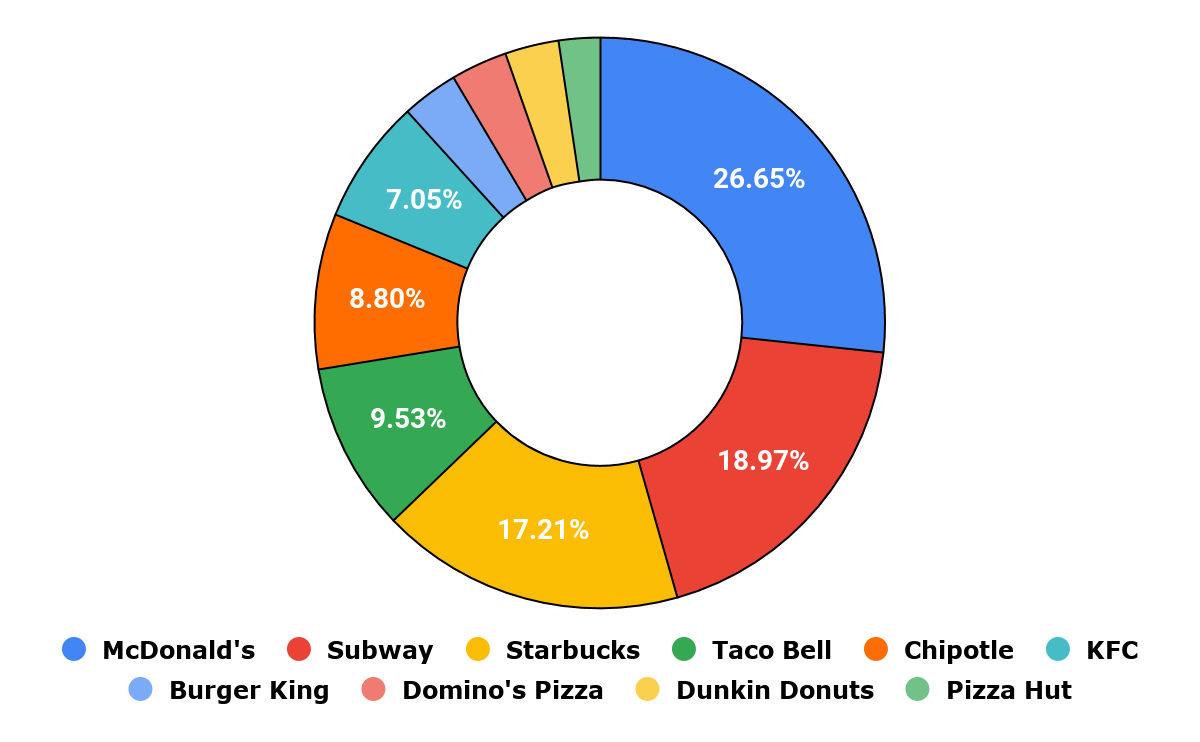 This infographic shows the fast food industry brands that provide delivery and their comparable SM mentions in percentages.

🍔 McDonald’s, Starbucks, and Subway Are Brands Consumers Had The Largest Appetites For On Social Media

Everything has changed due to COVID-19, especially the discourse on social media over customers’ favorite fast food delivery brands and what they’ve been up to, for better or for worse. The fast food chains that consumers discussed the most during a four week period (April 1 - April 30 was the time frame in which Digimind held its research) were McDonald’s, Subway, Starbucks, Taco Bell, and Chipotle. This comes as no surprise to people who follow the widely popular social channels of these restaurants, but also speaks broadly to their overall worldwide brand recognition and seeming importance within the broader food culture.

Consider the following insight from Digimind’s research, and understand the correlation between consumer sentiment on social media and product values: through our findings we were able to accurately determine that food items that garnered the most attention on social media included such consumables as burgers, sandwiches, and coffee. Lo and behold, which top three fast food brands within the delivery industry sell such items as their mainstay products? McDonalds, Subway, and Starbucks respectively. This is no coincidence, and something that highlights the importance of researching, understanding, and effectively utilizing consumer insights. 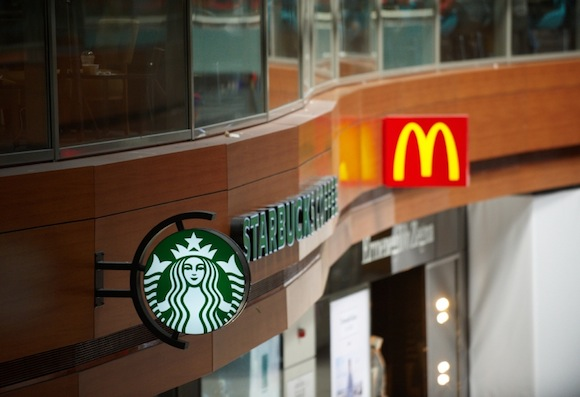 Below you’re encouraged to view Digimind’s in-depth graph on social media mentions for each fast food delivery brand. Noticing the spikes in conversations, it’s worth noting that these represent periods where these three brands did their best to ingratiate themselves to consumers with varying degrees of success (or lack thereof) - this helped us identify the following 3 trends online, as highlighted in the boxes.

A graph from the Digimind Stay-At-Home Industries report showcasing the spikes in social media mentions for the top three most mentioned brands in the fast food delivery industry: McDonald's, Subway, and Starbucks.

McDonald’s efforts to maintain a strong brand image has been mixed throughout the pandemic, with free meals for frontline workers making big waves on Twitter, to workers striking due to lack of PPE. Despite these issues for the Golden Arches, one important story that played out on social media revolved around a child and their parent’s attempts to bring Micky-D’s to their home through a pretend drive thru. Without any involvement from McDonald’s itself, this heartfelt gesture touched many people stuck in quarantine, and delivered positive sentiment at McDonald’s online. 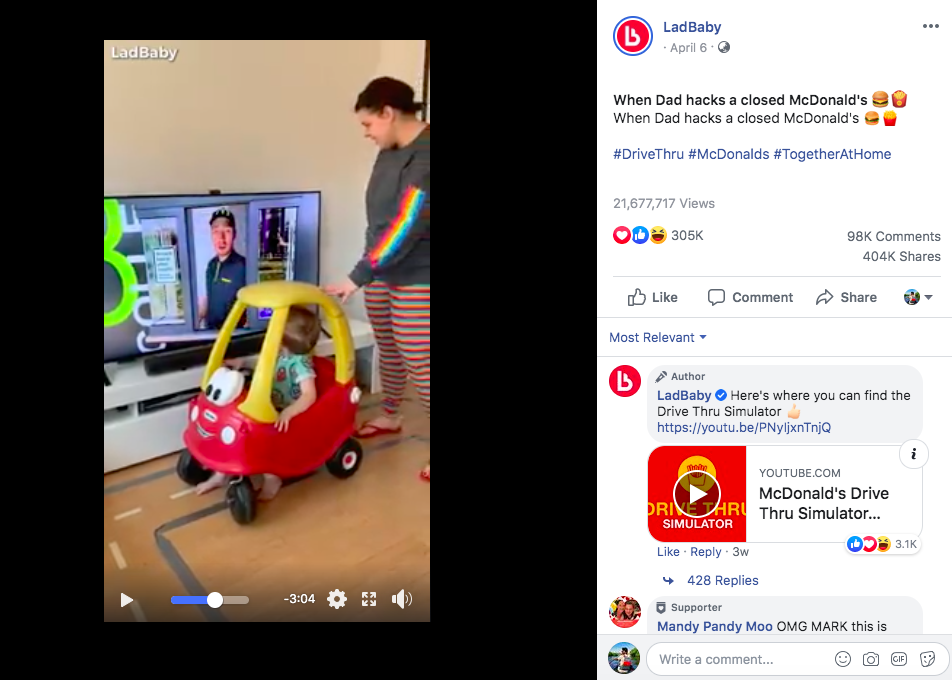 This example of consumers correlating a brand with a positive routine and happy memories resonated with many people, showing how organic acts of love do exist, and are important to consider when developing an effective digital brand strategy.

Like McDonald’s, Subway understood the importance of connecting with consumers on an emotional level, while conveying such efforts with strategic sensitivity. Did they succeed? Again, like McDonald’s, it had its moments and - hopefully - is learning from its mistakes. Examples of this ongoing effort to maintain a positive brand image included the Subway Grocery, a pop-up side venture that provided essential foods and materials to cash-stricken customers, as well as a mishandled attempt to deal with a PR crisis related to their decision to layoff hundreds of employees and shut down many outlets in light of financial hardship.

Their highest spike in mentions on social media during April (as gleaned from our research) happened to be one of positivity, and again, human selflessness, with the story of a man and his mother’s ex-boyfriend sharing kindness through good sentiments and good sandwiches.

In short, a very heartwarming narrative on social media of a now grown man paying back the kindness of his mom’s ex-boyfriend with digital “letters of gratitude”, for helping him grow up, and in return, receiving Subway sandwiches to illustrate how it evened the score between the two. This is a very interesting insight, and brands should use this instance to thank similarly useful customers, and inspire their marketing campaigns.

The success of Starbucks, despite the initial mass shutdown of their stores globally, highlights one consumer insight that doesn’t need mentioning - no matter the crisis, people always need coffee. A moderate spike in their mentions during April, based on the report, did however showcase how loyal said coffee fans are for the Seattle-based coffee chain, with a witty instance of a customer on Twitter defending it from the ire of a complaining consumer. 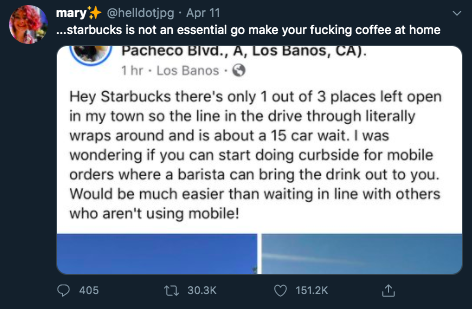 Humorous as it is heartening, this particular mini dialogue garnered positive sentiment for the financially battered business that’s still reeling from the almost $1 billion lost in the first quarter of 2020. By utilizing the knowledge of a consumer insight like this, and pushing the narrative of playful optimism on their social media platforms, there is a chance they could blunt the negative effect the pandemic is having on their bottom line, and thus help mitigate the loss of business as they try and reopen all their outlets by early July.

🤖 The Future Of The Fast Food Delivery Industry

There’re still a plethora of challenges the fast food delivery industry faces during this ongoing pandemic. With a second wave being predicted in North America by many health experts, prominent chains, including the ones highlighted in this article, will need to ramp up spending for their employees to keep them safe, offer more benefits and stronger pay to avoid strikes/negative consumer sentiment, and potentially prepare for a post-coronavirus world that relies much more heavily on quick, convenient deliveries over in-store ordering.

Some things are unavoidable, such as layoffs and health scares, but the ability for companies to effectively and quickly understand their consumers, empathize with their plight, and offer more than just cheap meals and plastic toys, will ultimately determine how successfully many brands will weather the storm of COVID-19.

If you want to learn more about the mentions and online conversations surrounding fast food industries on social media, as well as other important industries, then speak to one of our experts. Sign-up for a demo here:

food Brands Analyse de campagnes Insight Driven Marketing Social Listening Trends Industry Report Brand Protection
PREVIOUS POST
Asia Pacific’s Key Gaming Personas: Who Are They and How Can You Engage Them?
NEXT POST
The Most Discussed Brands in Q2 2020 and during Covid-19 lockdown