In our previous post about the benefits of Twitter for your digital marketing, we looked at how listening and analyzing Twitter conversations, in particular, allows you to find experts, identify leads, understand the buzz and even ground level information. This week, we will look at how Twitter is a valuable tool for measuring campaign impact, collecting opinions, better understanding a crisis, but also to discover new news sources.

5. Analyze crises and the real impact on online users

Twitter, with its high volume of messages during crises or events, allows you to analyze the opinions of Internet users on a large scale. We cannot talk of representative population in terms of Twitter demographics (95% under 54 years, for example against 80% under 59 years in the French census population), but often the seemingly large volume allows you to draw the main trends. Following the announcement of the Volkswagen scandal in September 2015, a large number of tweets were posted (over 600 000 in Europe within 5 days), all relaying the manufacturers cheating. All? not exactly. Some messages for Volkswagen were not linked to the scandal. When analyzing 150,000 French tweets mentioning the Volkswagen group between September 21 and 24, we could see that almost 30% were not correlated to the cheating scandal: in particular, those relating to car models such as the Audi Quattro, or the premium convertible. 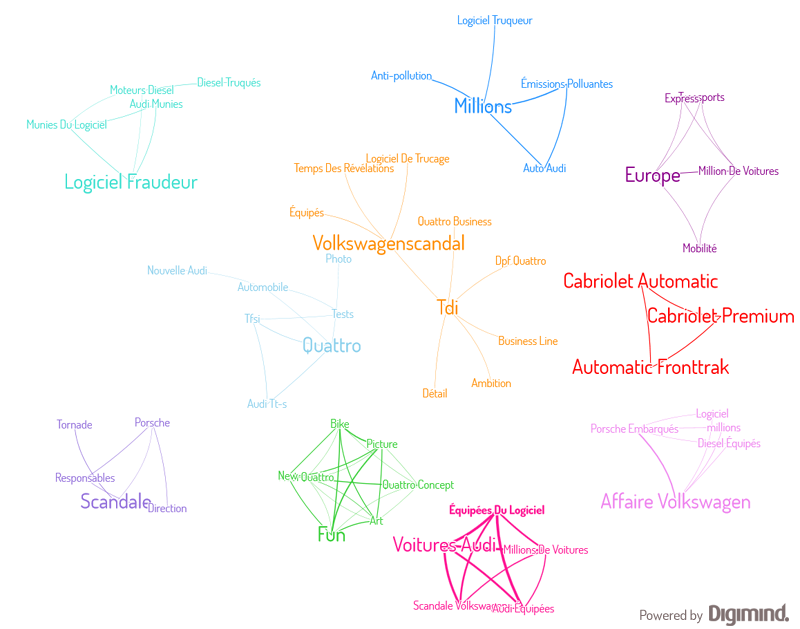 Cluster of most discussed concepts on Twitter surrounding the Volkswagen cheating scandal.

Twitter is a place to share.
A New York Times study explains that social users primarily share what they consider interesting and of value to others. Due to its short format, ease of retweets and shares by DM (direct message to tweeters), Twitter is an ideal platform for sharing.
In addition, the Twitter CEO of France says that journalists in France are very active on Twitter (especially since the DSK Scandal). "Politicians, journalists, athletes, comedians and actors make up the bulk of the troops" explained Damien Viel in March to Petit Web.
78% of journalists promote on Twitter as an essential trade tool according to the study "Journalism and Social Networks" conducted by the consulting agency Gootenberg reputation management in 2015.
Following a journalist on Twitter of course gives you access to their tweets - where they often relay articles - but, especially those of the people they are following (subscriptions), among which you will probably find many news sources (wider press, consulting firms, journalists, blogs, magazines ...)
By extension, exploring the subscriptions of Twitter experts, consultants and specialists, you will potentially reveal many sources of news.

Following the tip mentioned in the previous post, you can also search for Twitter lists devoted to news sources via query type "lists "press" site:https://twitter.com/"on Google.

7. Measure the impact of a campaign

If you launch a campaign, whether it's digital or taking place in real life, Twitter will allow you to assess the impact and views of tweeters: you can actually measure the volume of messages and analyze trends in user sentiments present on Twitter, including:
– Was my campaign well received?
– What is the evolution of messages over time? Are there tweeting peaks which can be observed for each new campaign?
– Where are the users most responsive to my campaign, TV, radio, press, web?
– What are the dominate feelings surrounding my campaign?
– Are my hashtags being relayed or have users created others?

The measurement of the most popular event or campaign hashtags is particularly informative: it allows you to identify the real impact of a digital campaign, it's relay and the response to the hashtags which are diffused on social networks or communicated through other channels (TV, press, billboards, POS, street marketing). For example, to see if the official Tour de France hashtag is the most used (#TDF2015), compared to ones spontaneously created by users, such as #TourdeFrance and #TDF.

The most used event and sponsored hashtags (aside from the cycling teams) for the last Tour de France.

Twitter works as a real-time survey tool and has the ability to supply large volumes of valuable opinions and trends for the assessment of your brand or event.
Furthermore, monitoring Trending Topics (TT) - themes tweeted on a mass scale within a few hours - means you know what is causing a stir amongst users (sporting events, gatherings and so often, TV shows).

Sentiment Analysis by car manufacturers during The Geneva Motor Show 2016.
Twitter is a real time web media commentary, whether it's an event you're watching live or one you're watching behind a screen: TV, computer, tablet. Thus, football games are massively commented on similarly to reality TV shows, and political events. For example, dataviz below links the reactions in real-time to President Obama's speech at the State of the Union (SOTU): it is possible to view the most tweeted topics paragraph by paragraph as the President's speech evolves: #education #economy, #jobs ... 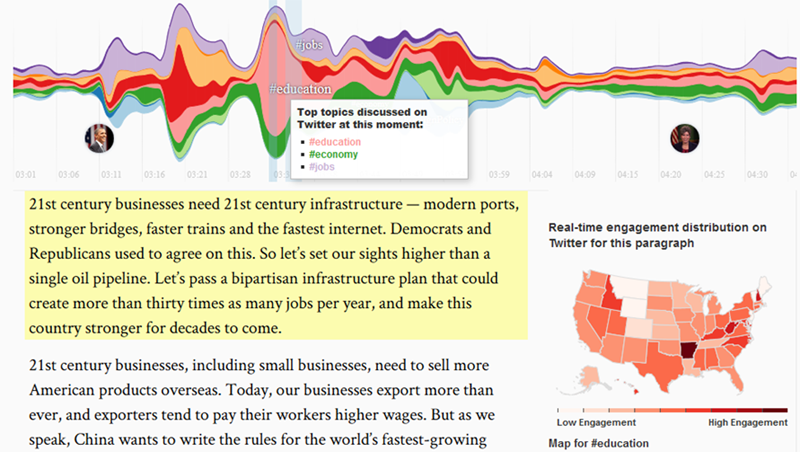 Data visualization of relative tweets surrounding President Obama's discussions on the US.