A common recurring issue for many brands is the ability to attract event sponsors by effectively communicating brand value to investors. The sports industry comes to mind for many as a highly commercialized industry – just look at the countless sponsored advertisements surrounding any sports stadium. For this reason, the following article will examine two client cases: one of a European sports federation, another of a football club which set out to acquire international investors. Both clients found themselves faced with the same issues:

To meet this challenge, our clients used social intelligence to monitor social media conversations surrounding earned media (internet users, journalists) and owned media (social accounts managed by the club and the federation). The purpose of collecting this data was to measure the brand commitment and reputation, and the effects of recurring or exceptional events on these conversations.

To successfully measure the impact of events and campaigns, accurate KPIs must be chosen in order to retain current investors, increase the size of their investments, and to convince new sponsors of the strong potential for ROI.

One of our clients, a football club, uses social listening to reinforce its marketing strategy when penetrating new regional markets. When targeting new regions and countries, the club’s digital marketing team primarily focuses on two strategies.

2. Monitoring social media during games and other related events.

The digital marketing team highlights messages from fans, TV and online viewers, and the media, which are then categorized thematically, by social platform, and socio-demographically. The team also analyzes press coverage and general interest by geographic area, region, and city to map recognizable trends.

An analysis of share of voice of the Tour de France teams, via Digimind Social.

With this social listening strategy, the football club was able to demonstrate the social influence of their team among highly influential media presences, including local and national celebrities inside and outside the sports world to investors. The marketing team’s analysis of audience potential and relevant socio-demographics were particularly useful for demonstrating the club’s ability to identify relevant and active social influencers with the potential to drive the ROI of sponsorships.

In this case, our client was a European sports federation less popular than football and rugby, but one that still receives regular televised media coverage. The federation sought to acquire new sponsors across TV, traditional media, and social media and to convince current partners to invest more in the federation’s communication and promotional campaigns. To begin this new campaign, the federation launched a study during its the season finals, the time of year when the federation tends to receive the largest volume of social media conversation.

The study measured the impact of their social media strategy and of the event itself in creating conversations across social media platforms. To obtain as relevant and exhaustive of an analysis as possible, the federation used Digimind Social’s tagging feature to collect messages regarding tagged themes including specific matches, clubs, players, influencers, sponsors, and stadiums. 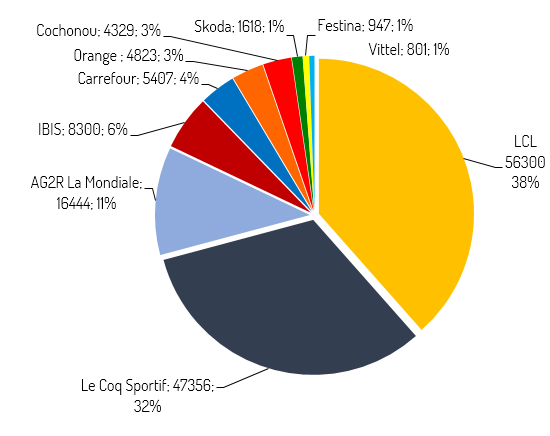 An analysis of the share of voice of French sponsors, via Digimind Social.

By measuring the impact of events and their associated digital marketing operations (live tweeting, Facebook Live, contests, etc.), the federation was able to demonstrate the value of social data generated during season finals. With this information, the federation was able to convince current sponsors to invest more heavily in their campaigns. With this data, the federation realized that, during finals, sponsors were able to increase their visibility by 9 to 30 times in terms of reach and volume of mentions compared to the rest of the season.  This data was used in pitching to prospective investors who ended up sponsoring the federation. When seeking to acquire new sponsorships, it’s necessary to:

How to Use a Social Media Search Tool to Find Future Trends
The Whats, The Whys and The Hows of Dark Social Monitoring
5 Reasons Why You Need Social Media Monitoring
Best Practices for PR and Communications Leaders - #CommsWeek2022
How to Use Social Media in Your B2B Lead Generation
Previous page
Next page