Every 60 Seconds, 72 Hours of Videos are Uploaded to Youtube (and other stats)

For lovers of web stats, according to Fisheo's Internet Facts 2014, a staggering 72 hours of video is uploaded to YouTube every minute. And each day, roughly 4 billion YouTube videos are viewed!

If that's not enough to blow your mind, think about this: there are 2.4 billion internet users in the world, and of those, 1.4 billion are monthly active Facebook users (as of October 20th, 2014). 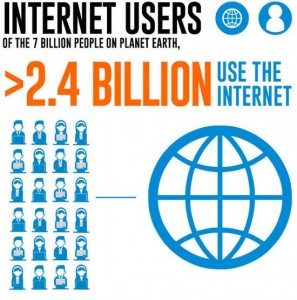 Mark Zuckerberg's quest for conquering the internet population doesn't seem to be slowing down anytime soon despite rumblings that Facebook is a thing of the past. On a similar note, Zuckerberg was once on CNN's list of "people who don't matter" in 2006.