Food under the microscope: Using data to monitor additives 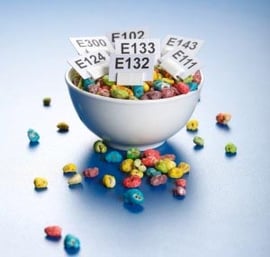 Food manufacturers use thousands of food additives, which allow our modern diet to be possible. Additives contribute to everything in our food from providing it with an even texture, keeping it from separating, and enhancing its flavor.

However there has been great concern about the side effects consuming these additives can have, thus certain food additives have been the subject of government regulation and consumer boycott. Businesses that are slow to understand the backlash against their foods immediately fall behind in sales. Understanding the importance of a particular food additive or the backlash against it isn’t just a matter of creating good food, it is also an important factor in selling that product.

Public opinion is vital in selling food; if the public does not support a particular additive it will become significantly harder to sell products that contain that additive. In early 2012 ABC began running reports about Pink Slime, an additive used in Beef to filter the content of fat in ground beef. By the end of the report, a poll conducted by Red Robin indicated that 88% of US adults knew about Pink Slime, and 76% of those who had heard about it were concerned. The nation’s three largest Grocery stores have stopped selling meat treated with Pink Slime, despite the fact that the USDA and US Secretary of Agriculture for Food Safety have supported it. This also occurred when the documentary Supersize Me critiqued the fast food industry. After the movie became popular public opinion began to turn against unhealthy practices of fast food restaurants. Eventually McDonalds eliminated their supersize option, and began marketing healthier foods, other fast food restaurants soon followed. Meanwhile Subway, a competitor of these fast food restaurants, had seen the direction of public opinion years before this tipping point, allowing them to gain a competitive advantage. They keyed in on the health benefits of their food long before their competitors caught up. Ultimately this allowed Subway to pass McDonald's as the franchise with the most locations in the world.

Although it is important to monitor public opinion, government action is the only way to truly ban or allow food additives necessary for production. Regulation varies greatly from nation to nation, and even somewhat from state to state. For example, many states ban the use of Trans fats, while many others have no such ban. The European Union is known for being significantly more stringent on food regulations than the United States. It is important to understand the wide variety of regulations that exist, to best market and create a product suitable for each environment. Furthermore it is vital to know which additives will be regulated in the future, that way a company can be a step ahead of their competition in figuring out a different additive to use in their product.

The Challenge in Finding out this Information

Scientific studies are being done all the time, by many organizations and many different companies. It is almost impossible to know about each of these studies. Missing even one vital study while your competitor sees it can give your competition an advantage over you.

An obvious problem occurs when trying to monitor each of these sources; how is it possible to access all of these sources at once. It is nearly impossible to monitor each of these sources, because they come from such a wide variety of places, and a simple Google search does a poor job of filtering out useless information. Common search engines make it impossible to isolate radical opinions, from popular ones. Any search must have extremely specific and effective key words, while being able to reject individual opinions that do not represent the group as a whole.

Government regulation needs to be closely monitored and it is so varied from nation to nation, state to state, and even city to city. For every government body there are at least twice as many sources reporting about legislation or possible legislation regulating each additive. It would be a waste of time to look through each regulation about each new additive from each possible source. A search of regulations must be composed of reliable sources that are capable of capturing the actions of as many legislative bodies as possible.

Need for an Intelligence System

There is only one solution: the information must be gathered effectively in one well organized place. The internet does this – somewhat. To maximize your potential it is necessary to use a tool to search for and organize every possible piece of information you could need.

That’s where Digimind comes in; it’s ultimately a tool that allows you to always be informed about any imperative news concerning your product. It gives a quick simple and organized answer to any question that needs to be answered about your product. Each section page tells a story, about your product, and how it is viewed by the people who really matter. By keying in on trending keywords Digimind allows your search to be relevant, catching every single piece of vital information you need. Digimind gives the greatest information advantage possible; and in this fast paced business environment with each company mercilessly toiling to gain even the slightest advantage, how can any company afford to miss out on crucial information?

Build Strategy
PREVIOUS POST
How to Make a Compelling Case for Strategic Change
NEXT POST
From Science 2.0 to Pharma 3.0 Q&A with Hervé Basset