How to Find and Target Your Customers Online

Digimind’s US Campaign Marketing Manager Hiba Haider recently co-hosted a webinar with Kevin Garcia, a Sr. Product Marketing Manager at Adroll. The webinar explored insight-driven marketing strategies, with the specific objective of outlining how organizations can use social data to identify and target online consumers. In the age of information, brands need to capture quality data and to continuously develop and implement insights from that data to remain competitive in their market. Data from Forrester indicates that insight-driven companies grow at least 8 times faster than the global GDP growth rate.

The question then, is how do brands become data-driven? At Digimind, we believe that social intelligence is a key part of this strategy. As of the start of this year, 2.44 billion people are using social networks. This doesn’t just influence how we communicate with each other - it means that social data is quickly becoming the largest and most scalable way to collect consumer insights that are real-time, authentic, and actually reflect the true opinions and needs of the consumers.

The following article will cover some, among the many strategies brands use to identify new and existing customers online.

What is Social Intelligence?

In psychology, social intelligence is defined as the ability to know oneself and to know those with whom you interact. In the marketing world, this definition doesn’t change all that much. A brand not only needs to understand its own vision, mission, core benefits, and differentiators internally, but it must also understand its public perception, customer feedback, and brand reputation as well. And like I mentioned earlier, with the shift towards digital as a means of communicating brand experiences, consumers are already having full-fledged conversations online. The objective of a well-integrated social intelligence tool is to meet consumers on the platforms they’re already active on and to engage with them there.

To effectively explain how social intelligence works, we’ll walk through a few insights pulled from Digimind’s latest report on the alcoholic beverage industry. For context, this report gathered data from Q4 of 2017, and we were following 3 main categories, the first of which is Beer, including domestic, imported, and craft beer. Second, Wine which included red, white, and rosé, and 3, hard liquor, which included vodka, tequila, rum, whiskey, and gin. 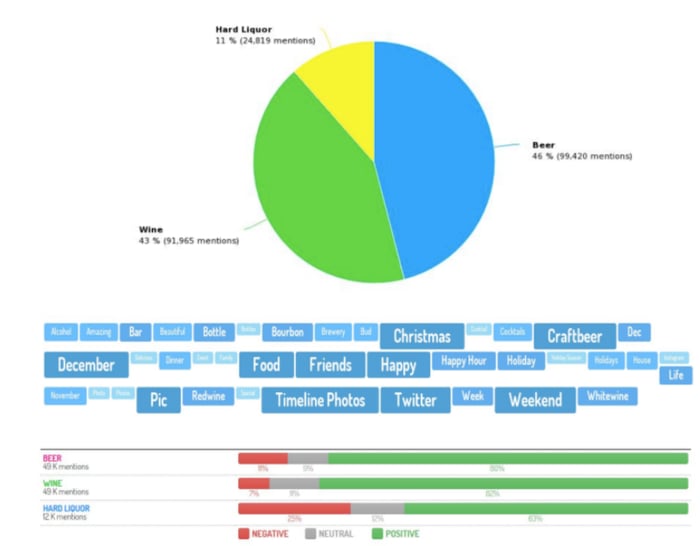 Using keywords related to these three categories, we pulled insights around brand reputation, sentiment, media breakdown, audience breakdown and more - which ultimately amount to the various puzzle pieces data-driven organizations need to identify their consumers. An important thing to note is that the strategies and practices implemented in this report can be adopted by all brands, despite which industry they’re in or what they offer.

The first step towards understanding your market is understanding your industry. Using the Digimind’s social intelligence platform, we analyzed the alcohol industry and found that nearly half of the conversation was dominated by mentions associated with beer, which got over 99,000 mentions in two weeks. Terms like “Food” “Friends” “Weekend” are commonly associated topics, as expected. With this report running before the holidays, terms like “Christmas” and “December” were commonly mentioned. In regards to sentiment analysis, you all three categories had generally positive sentiments associated with the terms, which isn’t surprising given that alcohol is strongly associated with celebration, especially during the holidays.

The ‘Where’ of Social Intelligence

Now that we’ve developed an understanding of what consumers said about the industry, it’s equally important to understand where they are saying these things. To help locate these conversation spaces, we pulled the following media breakdown. 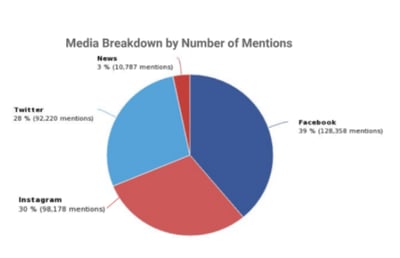 Share of voice breakdown by media platform, via Digimind Social.

Facebook clearly holds the largest share of voice in this breakdown, which is extremely helpful information for brands and marketers as they prioritize where to focus their time, budget, and other efforts. In this case, for example, these alcohol brands might reconsider the amount of time and money they spend on Instagram and Twitter campaigns because their audiences aren’t as active on these platforms.

This following visualization is about white wine consumers specifically. While many people hold the belief that white wine tends to be consumed by mostly women, a demographic report of the online conversation space for white wine revealed that men discussed white wine more often than women. While the margin was not incredibly large - 57% of mentions were made by males, this is still very interesting and potentially surprising data to consider when analyzing end users of a product.

A demographic breakdown for the white wine conversation space, via Digimind Social.

When looking at the breakdown by age, it appears that there are two distinct age ranges that tended to discuss white wine during the data collection period: one being individuals aged 18-25, the other 55+. For an alcohol brand, this information is useful in developing new products or campaigns - perhaps the design and marketing message would be tailored specifically for each age range.

Monitoring keywords, media breakdowns, demographic analyses are a few of the many ways that brands can understand their industry and target audiences. Of course, factors may change based on your industry, or whether you are a B2B marketer versus B2C, however, the overall practice of identifying noteworthy trends remains the same regardless of which products or services are being marketed.

Once a brand has developed a firm understanding of their industry, it becomes important for them to prioritize brand monitoring. A large component of social intelligence is social listening: the act of monitoring conversations surrounding your own brand in order to make informed decisions.

As an example, when analyzing the share of voice within the beer industry, we found that craft beer was dominating the conversation space, making up for with 97% of the online conversation. 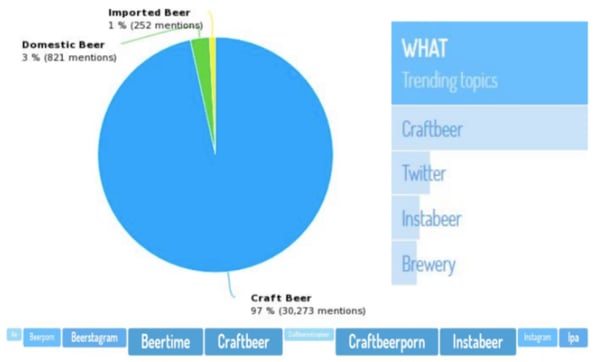 Share of voice and trending keywords across the beer industry, via Digimind Social.

When analyzing the origin of this skew, we discovered that it could partly be explained by the rise of Untappd, a geosocial networking platform for beer lovers to share and rate the beers they are enjoying. The app accounted for nearly 1000 of the total 31,346 mentions of beer throughout the data collection period.

Sam Adams, one of the beer brands monitored throughout the research period for this report, was very commonly mentioned on Untappd. If you were a brand manager at Sam Adams, for example, it would be in your best interest to monitor who was posting about the brand, what they said about your products, and whether the majority of brand mentions were positive or negative. Strategically implementing such a process is essentially the foundation of social listening. Once a brand establishes an organized routine for collecting and analyzing brand mentions, it becomes far easier to develop solutions and new initiatives to engage with these audiences.

Another significant aspect of any social intelligence strategy is the ability to identify influencers. According to a McKinsey study, consumer to consumer word of mouth generates more than twice the amount of sales that paid advertising does. Customers acquired through word-of-mouth are 37% more likely to be retained. People expect brands to talk with them rather than at them. They no longer solely expect brands to sell, but to entertain and inform as well.

Through influencer marketing, brands can strategically partner with the right personalities to spark organic conversation and increase their following. People, personalities, and celebrities are an incredibly valuable marketing channel.

An example is Instagram superstar Josh Ostrovsky, who many know as @TheFatJewish. Ostrovsky leveraged his large millennials fanbase and love for wine in order to collaborate with a wine distributor to create White Girl Rosé. Since the summer of 2015, Ostrovsky and his team have sold more than 30,000 cases of the label's signature rosé and Babe sparkling wine. Social media influencers are incredibly powerful players in today’s online conversations, so it's in a brand’s best interest to identify who they are and collaborate with them in mutually beneficial ways. 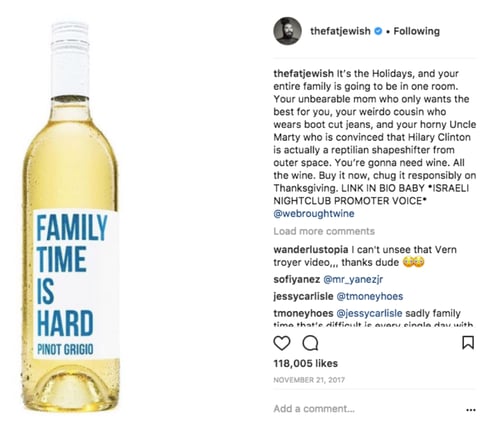 When it comes to identifying audiences, it’s vastly important to take the time to identify the influencers who most impact the day-to-day purchasing behaviors of target consumers. They may be famous celebrities or athletes, but with the increased accessibility offered by digital technologies today, influencers might be Youtubers, bloggers, social activists, content creators, and more. Celebrity sponsorship has been very difficult in the past, simply because of the price tag which comes with. With social listening, brands can curate a far more accessible and affordable list of influencers.

Finally, a best practice for identifying consumers online is tracking the digital presence of competitors. What are consumers saying about competitor products? How is the share of voice distributed across the market? The following breakdown shows a competitive breakdown between Jose Cuervo and Patron. Jose Cuervo took the majority of the share of voice, making up 76% of the online conversation.

One of the reasons for this skew of share of voice towards Jose Cuervo was that the brand was consistently included in a list of the top ads of 2017 for their ad title “Last Days.” The ad showed a group of bar-goers drinking and dancing inside, while the world was in an apocalyptic state - the tagline at the end of the ad read “Tomorrow is overrated.”

Gathering insights around this advertisement would not only help Jose Cuervo in identifying the ROI of their ad campaigns, but can be telling for Patron and other tequila brands as they analyze the shortcomings of their own ad campaigns, or capitalize on any noteworthy buzz or commentary. Remaining aware of your competitive environment not only reveals your brand’s place in the market, but can offer research useful in sparking new ideas, solutions, and differentiators.