The global alcoholic beverages market was valued at $1,344 billion in 2015, and is projected to reach $1,594 billion by 2022. And the US contributes a large quantity to this revenue, with more than 7.7 billion gallons of alcoholic beverages consumed in 2016. With the sheer magnitude of opportunity in this industry, marketers must remain competitive on all platforms in order to keep up with growing consumer demands.

In the case of wine and beer, the rise in homegrown breweries and wineries around the country has created a deep culture of not only consuming alcohol, but also supporting American-made brands as well as locally-sourced products.

The alcohol industry and social media have a deeply natural connection to each other due to their typical target consumer: millennials. In fact, alcohol brands have even spurred from social media influencers. Instagram superstar Josh Ostrovsky, who many know as @TheFatJewish, took his millennial influence and love of wine to create White Girl Rosé. Since the summer of 2015, Ostrovsky and team have sold more than 30,000 cases of the label's signature rosé and Babe sparkling wine. This was thanks to the social component with alcohol consumption- perfectly aligning with Ostrovsky’s social network following.

With the use of any one of the numerous social media platforms, one complaint to a few friends or followers can be discovered and amplified, reaching a huge viral audience and damaging brand reputations with the click of a button. Making necessary changes and committing to enhancing social media presence can provide invaluable benefits to an alcohol brand.

Using social insights, alcohol brands can also do more than just monitor their own brand reputation; they can understand competitors, find key messages to build advertising campaigns, develop new products, and understand where and how consumers are engaging with their products.

To better understand the market, Digimind conducted a study to assess general alcohol market trends as well as user interactions with US and Canadian alcohol companies on social media in the following industries from November 20, 2017 to December 4, 2017:

1. Beer has the majority of share of voice in the alcohol industry. 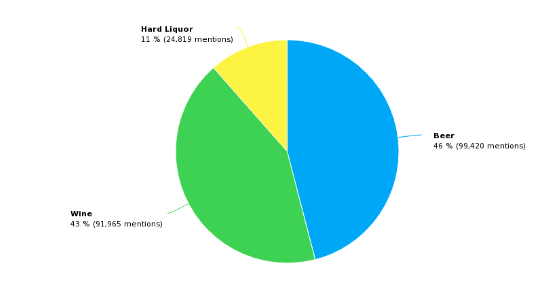 2. Despite beer having the share of voice, wine received the highest percentage of positive mentions.

We performed a sentiment analysis for each major subsection of the industry. All three subsections had a majority of positive sentiment by volume of mentions, with hard liquor holding the highest percentage of negative mentions at 25%. This may not come as a surprise, especially given the positive terms occurring in the analysis of top keywords - happy, friends, and holiday, for example. Alcohol is strongly associated with celebration, especially during the holidays. 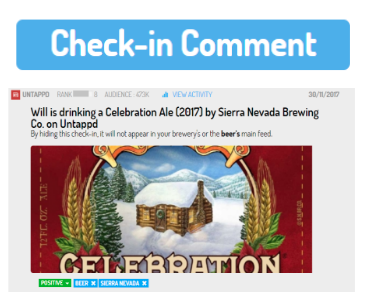 Untappd has a major presence in craft beer keywords and mentions.

A large volume of online conversation about craft beers involved the beer-focused social platform, Untappd. The platform enables users to comment on, share, and rate beers as they enjoy them. When looking into the key concept for each of the four highlighted craft beer brands, we saw that Untappd’s check-in comment feature was among the top-trending concepts for Sierra Nevada, Boston Beer Co., and Yuengling.

With the ever-growing popularity of craft beer culture, breweries should promote their beers on this industry-specific social platform, and engage with Untapped users who are posting about their beers on social media. 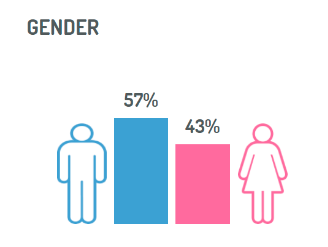 While many people believe that white wine tends to be consumed by women more often than men, a demographic report of the conversation space for white wine revealed that men discussed white wine more often than women. While the margin was not incredibly large- 57% of mentions were made by males- it provides an interesting statistic nonetheless. Regardless of cultural perception, there remains a strong market for white wines for both genders

Jose Cuervo took the majority of the share of voice from Patrón for the entire duration of the data collection period, making up for 76% of online conversation with 2,682 mentions versus Patrón’s 688. There were numerous peaks in volume of mentions across the data collection period. However, Patrón continuously experienced a relatively small share of voice for the entire period.

Among the possible explanations for Jose Cuervo’s larger share of voice was that Jose Cuervo was consistently mentioned in lists of the top ads of 2017 for their ad entitled “Last Days.” The advertisement uses an apocalypse scenario as a stand-in metaphor for living in the moment, as a group of bar-goers stay inside, dancing and drinking as the world around them is destroyed. As the ad closes, the tagline “Tomorrow is Overrated” reads on a neon bar sign hanging over a bottle of Jose Cuervo and two shot glasses.

The above insights are just a small taste of what alcohol brands can learn from social intelligence. Download the full report to understand how brands can: