It's that time of the year once more: the European Parliament Elections and UK Local Elections 2014 are finally upon us! Over the course of the last week, our social media monitoring tool, Digimind Social, has been surveying the social media landscape to see which parties got balloters buzzing in the lead up to the elections…

It’s the question on the tip of everyone’s tongues: how will the European Parliament look after the European elections on 22nd - 25th May 2014? Pollsters may have provided voters with projections, but few have harnessed the power of social media as an indicator of voting patterns: that’s where Digimind Social comes in! Instead of using a crystal ball, we look through the lens of social media monitoring tools, analysing online behavioural patterns to predict party leaders and losers in the European and UK Local Elections 2014…

EU Elections: what do the pollsters predict?

According to the European Parliament and TNS Opinion, the latest projection of seats in the Parliament’s hemicycle looks like this, with the European People’s Party (EPP) taking majority seats, shortly followed by the Party of European Socialists (S&D), Democrats (ALDE), European Left (GUE/NGL), Greens, European Conservatives (ECR) and other. 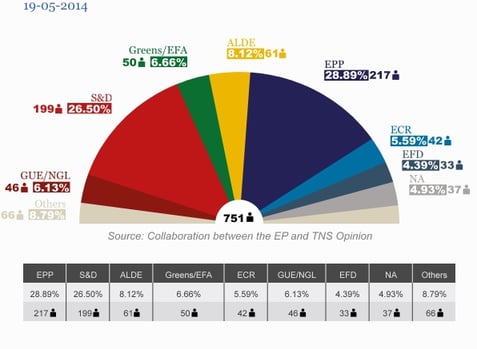 What does Digimind Social say?

According to Digimind’s social media analytics pie chart, which monitors mentions of the six largest European Parties, the above projections are reflected in the proportions of social media mentions, with the European People’s Party (EPP) leading with 37% of mentions, closely followed by the Party of European Socialists (S&D) with 29% of mentions and ALDE with 20% of mentions (higher than their proportion of anticipated votes) in third. 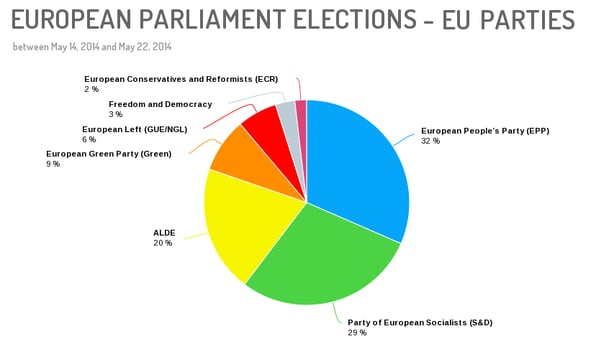 Looking at our social media statistics, it seems the more a voter talks about a party on social media, the greater the propensity that they will vote for that party. This may hold in wider Europe, but how are UK parties faring in the social media stakes?

United Kingdom: which party is soaring in the social media stakes?

Currently, of the 73 Members of European Parliament (MEPs) elected from the UK, the parties with the highest number of seats are the Conservative (26), Labour (13), Lib Dems (12) and UKIP (9). However this year, it seems the political landscape is about to change; radically. However, according to a recent Euro Elections poll, political preferences in the UK have been turned on their head, with the UK Independence Party (UKIP) the likely leader, suspected to secure over 50% of seats in the European Parliament...

In light of this political paradigm shift, Digimind Social asks, if propensity to vote for a party really is correlated with the amount of mentions they receive on social media networks, then who is currently “winning” the mentions marathon on social media in the UK? We delve into the depths of social media networks across the country to see whether social media can paint a clearer picture of the true party preferences of the British public...here’s what we found:

The predictions of pollsters about party positioning in the EU elections and local elections across the country and public opinion on social networks are quite literally, poles apart. For the past week, Digimind Social has been monitoring the social media sentiment shown towards each of the main political parties in the UK and here’s what we found:

Despite predictions that UKIP will come out on top during the EU elections, it seems the British public feel otherwise, with 67% of voters voicing their concerns about UKIP’s radicalism on social networks. What’s more, the British National Party (BNP) and the Conservatives, it seems, aren’t quite conjuring up the positive spirits they would like either, with 87% and 57% of more malicious than magnificent mentions, respectively!

When it comes to party leaders, social sentiment isn’t so sunny for some, with 78% of social media mentions from the UK grilling Griffin’s policies, 60% of mentions unfavourably referencing the far-right tendencies of Farage and 41% crucifying Cameron. Miliband and Clegg sit on the fence when it comes to mentions with majority neutral, Bennett lives up to her party’s name, capturing 50% Green (positive) mentions and the minimal mentions of Alex Salmond in the mix proved suprinsgly positive as well. 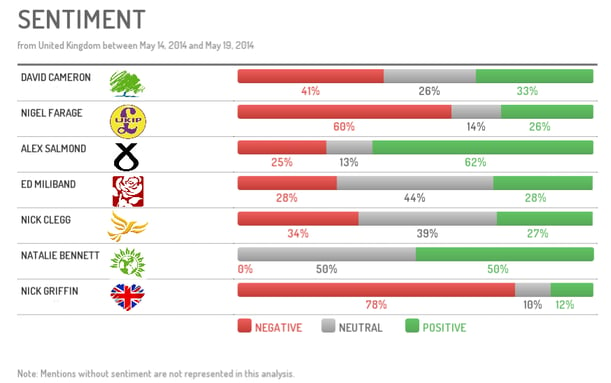 Where are the British public posting?

Digimind Social’s media breakdown table gives us a clearer picture of which online media sources the British public are posting on to talk about party leaders. 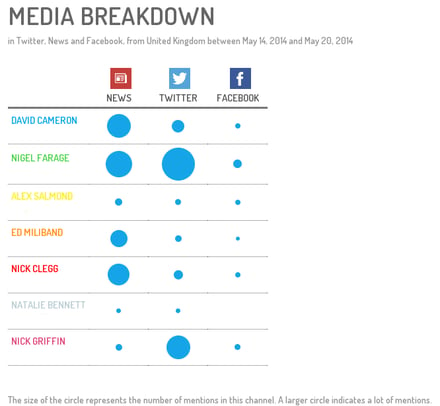 Despite internauts taking to Twitter in their thousands to put their points across about party leaders, interestingly, it was the News channels that pushed out the greatest amount of press on the UK political figures. Interestingly, Nigel Farage and Nick Griffin, leaders of the notoriously controversial UKIP and BNP parties, topped the table for Twitter mentions. But how did Twitter followers really feel…

UKIP’s latest hashtag campaign #WhyImVotingUKIP, which is now trending on Twitter, has taken a social media “U-turn” of it’s own, with thousands of internauts harnessing the hashtag to hit back at the party...take a look at a few of our favourites:

So much for Oscar Wilde’s age-old rhetoric: “there’s no such thing as bad publicity”...

UK Voters: What are you buzzing about?

Digimind Social surveyed the social media landscape in the past week, to find out exactly what was trending on social media sites. Our word cloud collected keywords from across the UK and analysed which words were causing mention mayhem online: 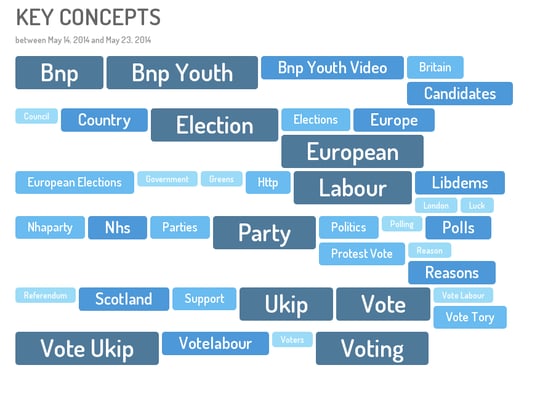 It seems UKIP and the BNP are creating keyword chaos - but quite possibly for the wrong reasons, in particular, the “BNP Youth Video”... What’s more, the Labour party on the left are stirring up a social media storm of their own, with multiple mentions of “Labour” and “Votelabour”. Social media buzz surrounding the words “Vote” and “Voting”, also demonstrate the growing cause to convince the public to cast their votes…

Well, you’ll just have to keep your eyes peeled for our next blog (out Monday 26th May) which weighs up whether our social media stats are as savvy about seeing into the future, as we predict!

Want access to statistics like this and more? See a Live Demo of Digimind Social today and keep your company up to date with what's trending in the social media (and political!) sphere...