Influencer Marketing: Inside a Viral Campaign

This article will focus on an influencer marketing case study, specifically, a viral campaign organized and orchestrated by online celebrity Jerome Jarre, famous for his viral Vines and YouTube videos, alongside the humanitarian operation for Rohingya refugees in Bangladesh. The purpose of this case study will be to understand the mechanisms behind the influencer marketing strategy used to promote campaign efforts and collect donations.

I. What is an influencer?

There’s an abundance of literature on the internet regarding influencer marketing, so we will keep the definition simple. An influencer is a person who, through his or her actions and messaging, has a direct effect on the behavior of those who follow, watch, or listen to their content. After viewing an influencer’s content, his or her followers may purchase a product, adhere to an ideology, or seek new information. For example, you might buy a pair of shoes worn by your favorite athlete, or try out a recipe posted by a chef on their Instagram account.

Jerome Jarre was originally social media celebrity who rose to fame on Vine, a content-sharing platform owned by Twitter on which users post 6-second videos. Jarre posted his first Vine on its day of launch in January 2013 and gained over 8.6 million followers throughout the platform’s existence. Jarre is regarded as one of the first celebrities born out of social media, and his success piqued the interest of Ellen Degeneres. Following his appearance on Ellen, Jarre reported that his Vine following jumped from 20,000 to 1 million in a month. After covering the Red Carpet of the Oscars for Ellen, Jarre was hired by Canal+ for the Cannes Film Festival in 2014 and created content with many celebrities, including Robert De Niro, Ben Stiller, and Michelle Obama.

Jarre’s humanitarian efforts became known to the general public following his call for donations to fight famine in Somalia in March 2017, from which he collected over $2 million. More recently, on November 28, 2017, Jarre went to one of the largest refugee camps in the world, on Cox’s Bazar in Bangladesh, which hosts the Rohingya people in order to raise awareness around the Rohingya refugee crisis and raise money to alleviate the situation. Presently, the fundraising campaign has raised $2,151,840 in two months.

Jerome Jarre’s has millions of followers across all major social networks, however, for the Rohingya operation, he primarily used Twitter and Facebook to reach prospective donors. In the final quarter of 2017, Jerome’s messaging generated over 1 million interactions. As of January 2018, Jarre’s community consisted of the following:

III. Inside a Viral Campaign

Jerome Jarre is an excellent example of a native social media influencer: he developed his notoriety primarily through social media, and displays expertise across all major social networks, particularly in creating viral content.

The virality of Jarre’s Rohingya campaign can be attributed in particular to 5 complementary practices:

Jerome, along with the rest of the humanitarian operation, was stationed at the refugee camp in Bangladesh. To offer donors a real-world look into the situation facing these refugees, Jarre publishes videos of himself interacting with the Rohingyas and helping out around the camp. On the day of the campaign’s launch, the campaign published a video of famous French actor Omar Sy, who explained the Rohingya crisis and urged people to donate. 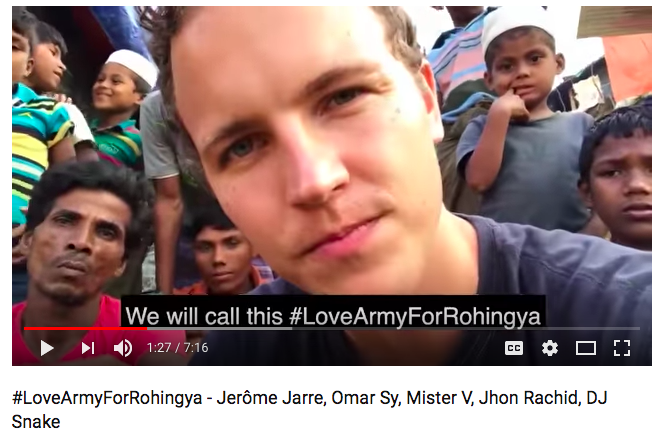 A screenshot from Jarre's 48-hour livestream, as he explains the objective of the campaign.

Following this initial announcement, Jarre broadcasted a 48-hour long livestream on Facebook, offering a tour of the camp and allowing refugees to introduce themselves. The team was accompanied by Brut Media, who promoted the humanitarian efforts to great results: Jarre’s first Facebook video received 1.9 million views and 44,000 shares.

The use of campaign-specific hashtags allows for more easily identifiable content which instantly communicates the campaign’s objective. Jarre’s dedicated hashtag for all humanitarian efforts is #LoveArmy, which was adapted for this campaign as #LoveArmyForRohingya.

As demonstrated by the graphic below, at the beginning of December, the volume of messages using the hashtag exceeded those mentioning Jerome Jarre’s name.

The volume of mentions of the campaign hashtag versus Jarre's name over time, via Digimind Social.

3. Onboard Celebrities and their Communities

For this operation, Jarre enlisted celebrities to accompany him to the refugee camps, all of whom had substantially large followings across Twitter and Facebook:

Another mechanism used in order to spread messaging beyond the communities of involved celebrities was to challenge companies and politicians to donate to the cause. Campaign participants tweeted directly at French president Emmanuel Macron, asking him what he can do about the situation.While he has been controversial throughout his career, Turkish president Recep Tayyip Erdoğan tweeted using the #LoveArmyforRohingya hashtag, which guaranteed visibility among a vast audience previously untouched by the campaign.

The campaign has also called on companies, usually targeting larger brands that would likely have the resources to donate. Donations are not the sole reason to reach out to these companies, however. Jarre and his associates specifically targeted brands who could provide logistical support and increase the visibility of the campaign, including Coca-Cola, YouTube, Google, and Turkish airlines.

Another best practice from this campaign is to provide instructions for internet users to spread the campaign message. Onboard celebrities asked their communities to tag influential people and companies with financial resources with which they could donate to the cause. 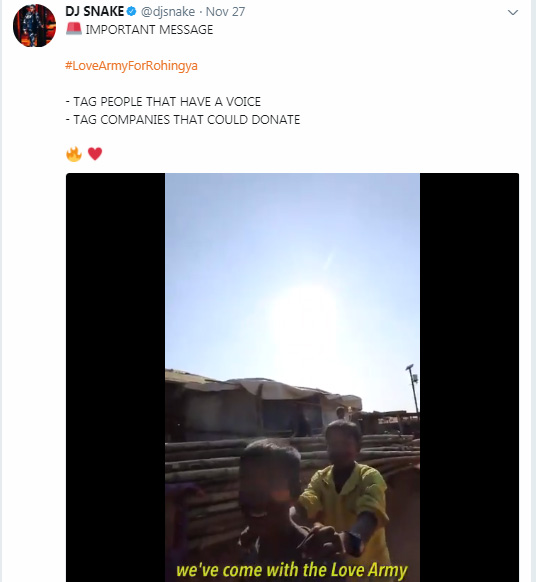 Instructions for propagating the campaign's message.

The fact of celebrity culture is that celebrities have connections within the culture, which demonstrates the benefit of Jarre’s partnerships. Jerome Jarre is known well within the world of entertainment and television, and as a result, a very diverse group of celebrities picked up and promoted the campaign, resulting in a truly exceptional level of outreach.

IV. What was the impact?

Jarre’s humanitarian campaign was a huge success in terms of virality, audience reach, and the speed of propagation. In less than 24 hours after the campaign’s launch, the peak audience reached was 178 million internet users. Within 7 days, that number had reached 237 million users across 45 countries around the globe. There were a very large number of Level 10 influencers involved in the campaign, based on factors indicating the highest levels of engagement, audience reach, and influence.