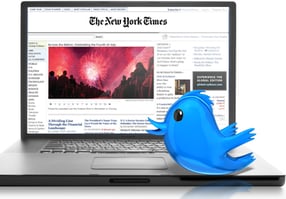 If a tree falls in the woods, and no one is around to tweet or take a selfie with it, does it really make a sound? The answer: probably not.

Today, news without social media is at best sluggish and at worst non-existent, so it is unsurprising that even old media publications like The New York Times have turned their attention to more modern forms of communication with their readership. It’s not just that they’re trying to be trendy and attract a younger crowd; in fact the fastest growing demographic for sites like Twitter are those aged 50 and over. No, The New York Times have invested time in social media to fully understand it and use it effectively to amplify their online voice, and the results speak for themselves. In a recent study by Digimind, The New York Times were found to have a much bigger online presence than new media sites like Mashable, Buzzfeed, and The Huffington Post which only exist in digital form.

So, how did they beat the ‘media du jour’ at their own game? Well, by learning how best to connect with their readers on Twitter, then writing an article about what was most effective, then tweeting said article and engaging the online community further. Clever, right? Here’s what you can take from their 7 most successful Twitter strategies.

The New York Times claims that breaking news stories fuel an influx of visitors to their Twitter page, as site users sit and wait for updates on the story, however they stressed that they always ensure their posts are accurate.

For brands, it’s a similar concept. If you want people to keep visiting your Twitter feed, you need to establish yourself as a trusted voice and thought-leader in your industry, offering up-to-date, relevant information. You can monitor your brand reputation and reply to critics to ensure you maintain a trusted presence, and publish a combination of your own content and that of others on your Twitter feed to establish yourself as a thought-leader and fuel discussion. This will result in a stronger online voice for your brand.

Tweets by journalists which are then re-tweeted by the NYT get a much larger response. Trusted reporters connect directly with readers by bringing them breaking news stories from all over the world.

The idea here is simple, human-to-human interaction is much more effective than business-to-human communication. While it is important that the brand is present on Twitter, it is just as important to have your employees tweeting as well, as this will humanize your brand and make people more likely to communicate with you.

The NYT gives a voice to their followers and involves their readers in debates and discussions by organizing highly structured Twitter Q&A sessions with reporters.

The best way to get people involved in online discussions, is to make them feel as though their opinions are valued. The NYT often includes comments made by its readers in news segments in order to generate further discussion with other readers. In business, interaction is key to building a relationship, so you should always be on hand to respond to comments about your brand or industry online and to make your followers feel heard.

Automated Twitter accounts are dangerous, as there is no one on hand to correct crises before they snowball. The NYT learnt this the hard way after they Tweeted a story claiming an English man had won the Wimbledon Tennis Championships for the first time in 77 years. The winner, Andy Murray, is in fact Scottish, and the backlash had already intensified by the time they realised their error.

An obvious lesson; man your social media accounts at all times. If you don’t, crises can quickly escalate and damage your brand reputation.

#5. Clarity works better than being clever or obscure:

Whether it’s your own content or a post by someone else, you shouldn’t just thoughtlessly tweet the title as it may be too obscure to garner interest. A little editorial effort goes a long way on Twitter, and it is obvious that users prefer a ‘what you click is what you get’ approach to social media links.

The NYT sometimes post a popular article 2 or 3 times to get more clicks, as it is likely that those who didn’t see it the first time will be just as interested as those that did. The key is balance though, as they do not recycle content that is no longer relevant.

Popular content is king on social media, so if you’ve got it, flaunt it. Maximize the full potential of this content by tweeting it more than once, and watch more people jump on the sharing bandwagon and create noise about your brand.

Some of the NYT’s most niche content has, unexpectedly, been the most popular, and it is often difficult to pinpoint exactly why. However, the publication noted that content like this is usually given an initial boost by a celebrity share.

If your content is tweeted by someone with a large following and a lot of influence, it will amount to a huge amount of exposure for your brand, a renewed interest in your content and potentially an increase in followers.

To learn more about how to make social media work for your business,

E-reputation Monitoring: 3 Steps to Audit and Map Your Reputation
3 Essential KPIs to Predict and Measure the Real Impact of a Crisis
3 Steps to Measure the Impact of Reputation Crises on Your Brand
How to Effectively Manage Reputational Risk Challenges?
3 Smart Ways Johnsonville Sausage Leverages Social Listening For Success!
Previous page
Next page