Understanding how much influence influencers really have, how to interact with them, and why the youth desire to become one.

As influencers have successfully infiltrated almost every conceivable niche, partnering with them has now become an essential part of marketing strategies . In fact, brands are estimated to spend around $15 billion on influencer marketing by 2020.

A study by Morning Consult interviewed 2,000 13-38 year old Americans and found that 72% of Centennials and Millennials follow influencers. Centennials, otherwise known as Gen Z, are persons born at the end of the 20th century and onwards. Millennials, otherwise known as Gen Y, are those born in the eighties and nineties. These two generations are among the most powerful driving forces in the marketplace. It is estimated that centennials alone will comprise 40% of consumers and influence nearly $4 billion in discretionary spending in 2020.

Influencers are a strategic way to reach these young consumers, as they tend to turn to social media to learn about new products, and trust these groups of people. The challenge for companies is understanding how to best engage with this group of consumers through influencer marketing.

The role of influencers is constantly growing and changing as more centennials and millennials use social media for purposes other than communication. The top functionalities and interests differ by gender. As seen in the chart below, men tend to prefer gaming and fitness/sports influencers, while women regularly follow beauty/skincare and fashion influencers. 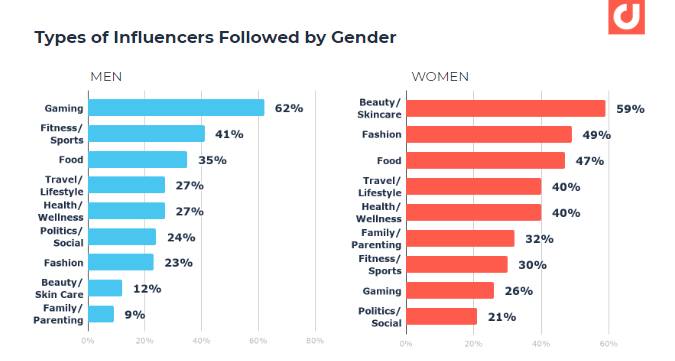 These young consumers know and follow several influencers at a time, as closely as they do with popular celebrities. For centennials, YouTube influencers are as well-known and well-liked as major celebrities. Among Gen Z men, for example, 95% know Youtube-star, PewDiePie, the same percentage as those who know Lebron James. Among Gen Z women, 86% are familiar with Youtube-star, Shane Dawson, which is higher than the 80% who are familiar with Jennifer Aniston.

Data from the report showed significant differences between the two generations. The younger the consumer (ages 13-16), the more inclined they are to follow and be knowledgeable about several influencers. For example, while 62% of 13-16 year olds hold opinions of Shane Dawson, 60% of older millennials (32-38 year olds) have never heard of the influencer.

Leveraging Digimind’s Historical Search tool, data shows that millennial and centennial females tend to post more about Shane Dawson.  It is also evident that the influencer is controversial, with polarizing online sentiments. 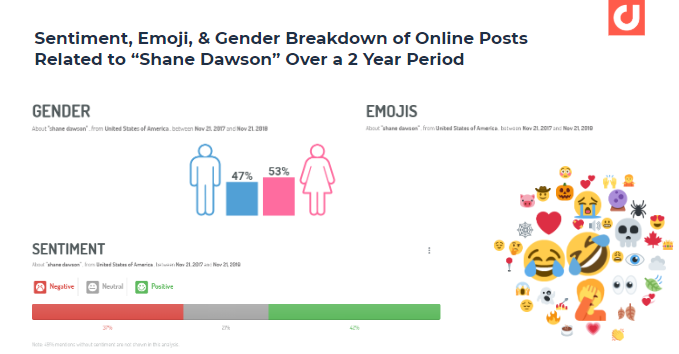 Understanding the reasons behind the shift towards influencers can prove beneficial to companies hoping to reach out to this market segment. When young Americans were asked why they follow influencers, four themes emerged:

How Brands Can Interact with Influencers

Social media plays a key role in the customer journey for younger people. These platforms are often used for discovery and learning in the awareness and reputation stages, presenting a significant opportunity for brands. 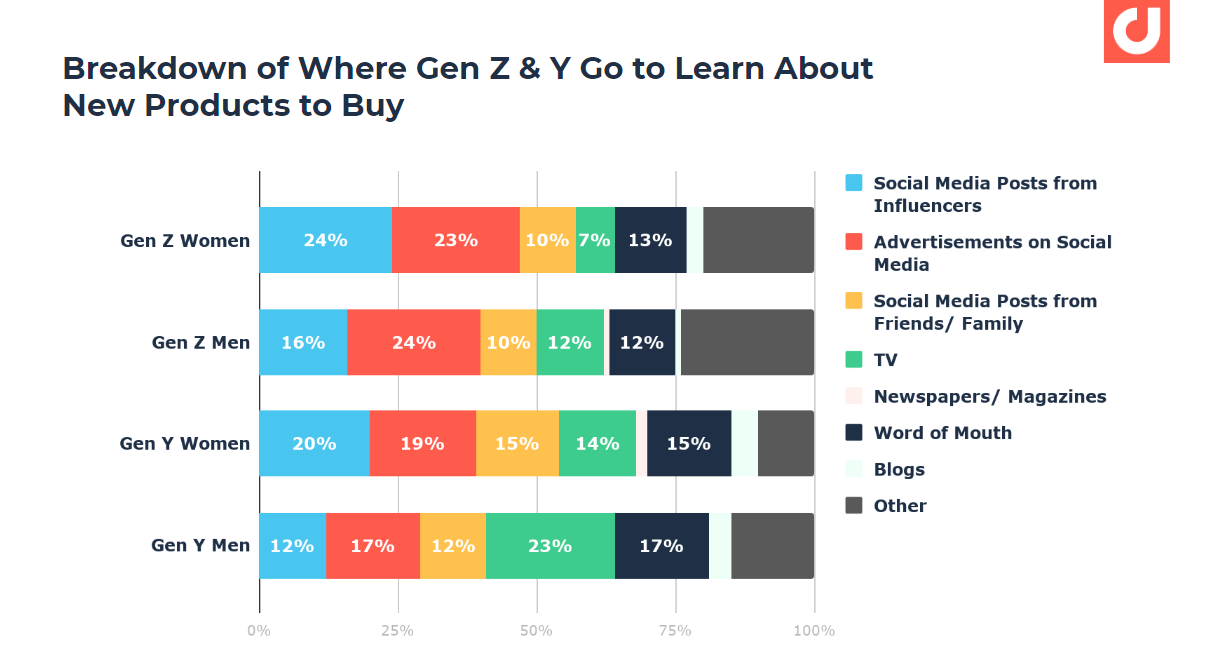 Influencer marketing has the power to bolster a brand’s long-term reputation and credibility. Implementing this channel into marketing strategies can help maximize a brand’s ROI. In order to do so, however, a company needs to work with the right influencers, who have the ability to help them reach the right target audience, on the right platform.

It is also important to understand the trust levels among millennials and centennials with the influencers they follow to appropriately include them in a product marketing campaign. Only 10% of Gen Z and Y have a lot of trust in influencer product promotions, whereas 47% have some. Frequent social media shoppers, however, are more trusting, with 25% having a lot of trust and 56% having some. Additionally, while celebrities used to be the go-to for brand ambassadors and spokespeople, 51% of young consumers trust influencers on social media for product promotions, compared to the 41% who trust celebrities.

For these reasons, companies should strategically align themselves with influencers whose beliefs and lifestyle choices match their products and brand ethos  to develop a more genuine and sincere means to promote their brand. As seen below, it is most important for an influencer to be knowledgeable and relatable to effectively promote a brand’s offerings.

Drivers for Millennials and Centennials to Become Influencers

Influencers are increasingly gaining fandom at the level of celebrities due to the proximity and relatability they share with us ‘normal folks’. 27% of centennials and millennials personally know an influencer. For this reason, young consumers believe becoming an influencer is significantly less farfetched than becoming a celebrity. 54% would accept the opportunity to become an influencer and an outstanding 86% are willing to post sponsored content in exchange for money, proving that the potential micro-influencer market is substantial.

That being said, it is also important to note that 61% of young social media users organically post content on brands or products they like. This highlights the importance of effective community management to allow brands to pick up on and engage with such posts to develop relationships with customers and build customer loyalty.

Although there are many striving influencers in the digital world, many have different underlying motivations. Understanding these can help brands appropriately approach a potential influencer partner. For example, a strategic approach towards someone who is money-motivated, versus someone who wants to make a difference in the world can vary greatly. 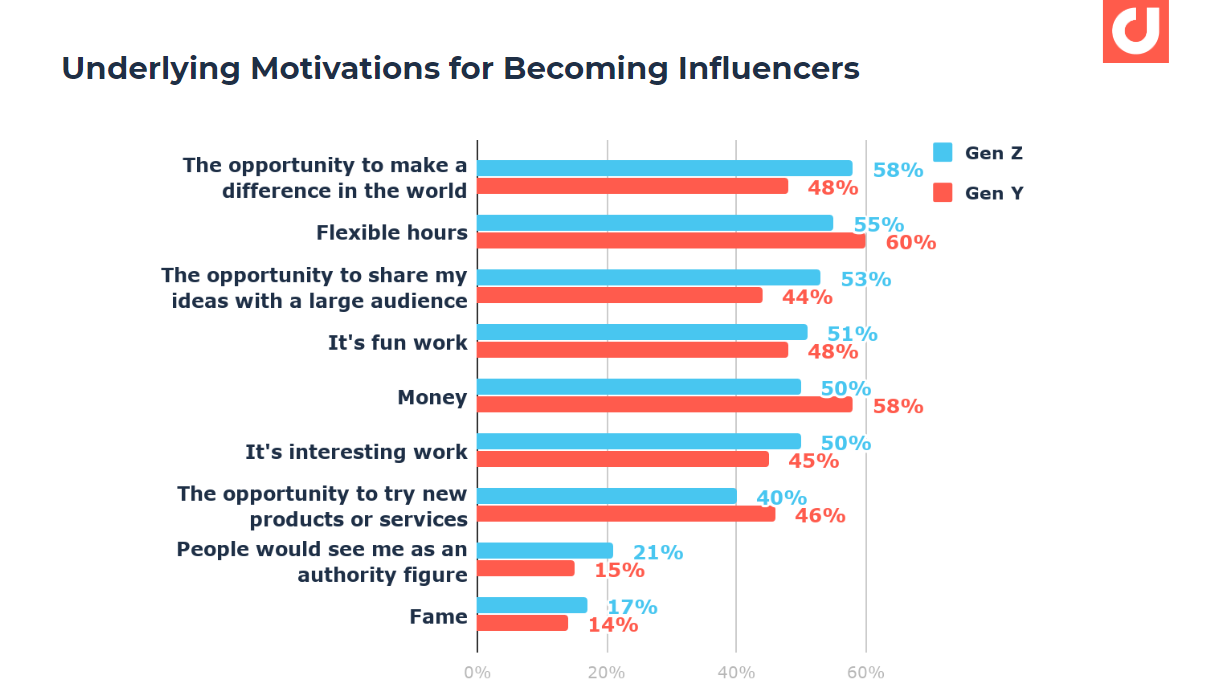 More and more brands are understanding the benefits of influencer marketing and leveraging this outlet to their advantage. With today’s youth digitally surrounding themselves with influencers to learn about various subjects and products, marketers have to strengthen their social media strategies with the appropriate influencer partnerships if they hope to effectively reach the next generation of consumers.

With a background in consumer economics, marketing, and international business, Alina is a Digiminder passionate about global market insights. In her free time, you can find her reading historical fiction or re-watching old star trek episodes.

The Whats, The Whys and The Hows of Dark Social Monitoring
5 Reasons Why You Need Social Media Monitoring
Best Practices for PR and Communications Leaders - #CommsWeek2022
How to Use Social Media in Your B2B Lead Generation
How to do Online Reputation Management (ORM)?
Previous page
Next page