TikTok: Key figures and statistics in the UK and in the world in 2022

TikTok, the short video application continues its meteoric rise. For the UK, the number of monthly active users of TikTok is 9.2 million. According to projections, TikTok has surpassed Snapchat as the third most popular social network in the UK, and the difference will get bigger as it develops.
Nearly a third of the UK's population and more than half of users of mobile social networks—21.1 million people—will regularly use TikTok by 2026.

Worldwide, the number of monthly active users is 1.2 billion. 25% of TikTok users are between 10 and 19 years old. Between March and May, it is the one of the most mentioned brands on other social networks (Twitter, Facebook, Instagram) across all sectors. In July 2021, TikTok reaches 3 billion downloads worldwide. In September 2021, TikTok announces it has surpassed 1 billion monthly active visitors.  We take stock of the number of users in the UK and worldwide, downloads, average age, demographics, time spent, revenue generated by TikTok in 2020 and the evolution in 2021-2022.

TikTok in the UK

I. TikTok in the UK

1. Number of active TikTok users in the UK:

In the UK, TikTok users spend an average of 41 minutes a day on the app. March 2020 was one of TikTok's busiest month with 115 million downloads worldwide, including 745 thousand from the UK. Furthermore, TikTok is downloaded over 1 million times every month,

In January 2022, there were 66.99 million internet users in the UK. At the beginning of 2022, 98.0 percent of the country's citizens were online in the United Kingdom.
Internet users in the UK increased by 300,000 (+0.4%) between 2021 and 2022, according to a Kepios research.
For context, these user statistics show that 1.37 million UK residents did not access the internet in the beginning of 2022, which translates to a 2.0% offline population at that time.

2. TikTok demographics in the UK 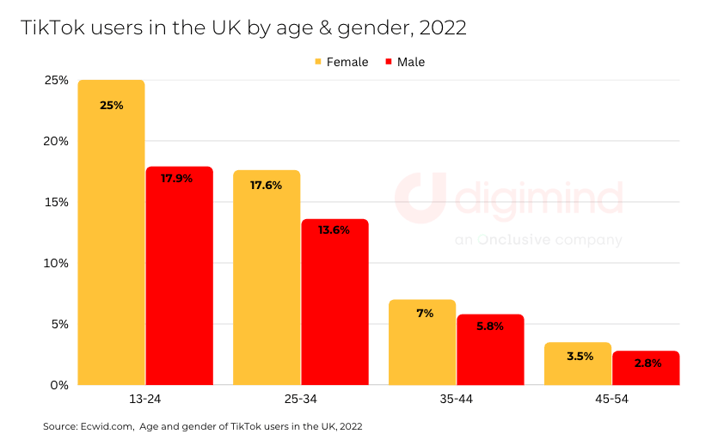 The main audience of TikTok's users in the UK is mostly made up of women between 13 and 24 years old (25% of the audience) compared to 17.9% of men for this same age group.

More than 45% of fashion and lifestyle customers in the UK who use TikTok claimed to utilize the social media platform between one and three hours per day in a 2022 poll conducted in that nation. Additionally, adult TikTok users in the UK will spend an average of 49 minutes per day on the service, far more than any other social media users. 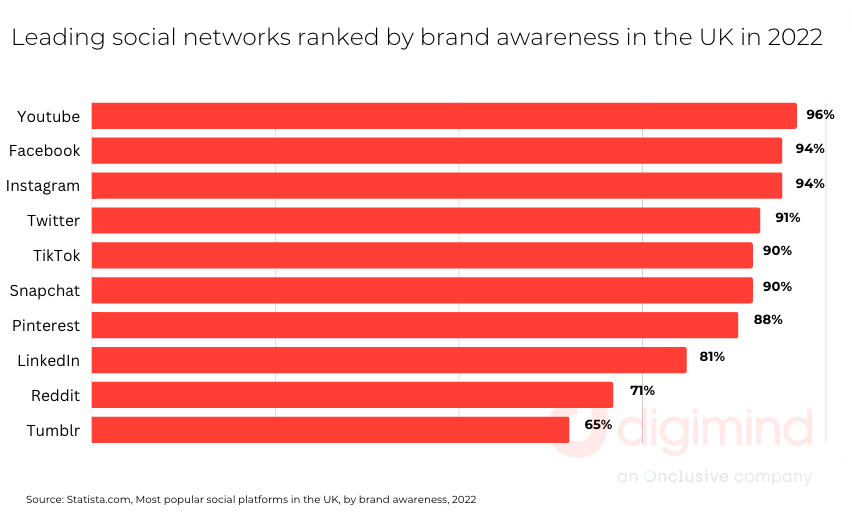 The Top 10 influencers on TikTok from the UK are:

At the beginning of 2022, TikTok advertisements were seen by 40.4% of all adults in the UK who were 18 or older; also, TikTok's total ad reach in the UK was equivalent to 32.6 percent of all local internet users, regardless of age. 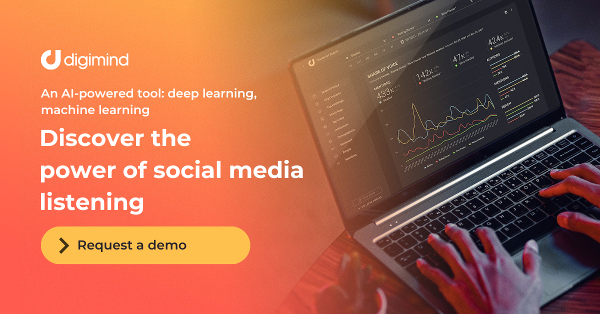 1. Active users and downloads on TikTok

AppAnnie predicted in November 2021 that TikTok should surpass 1.5 billion monthly active users in the 2nd half of 2022. 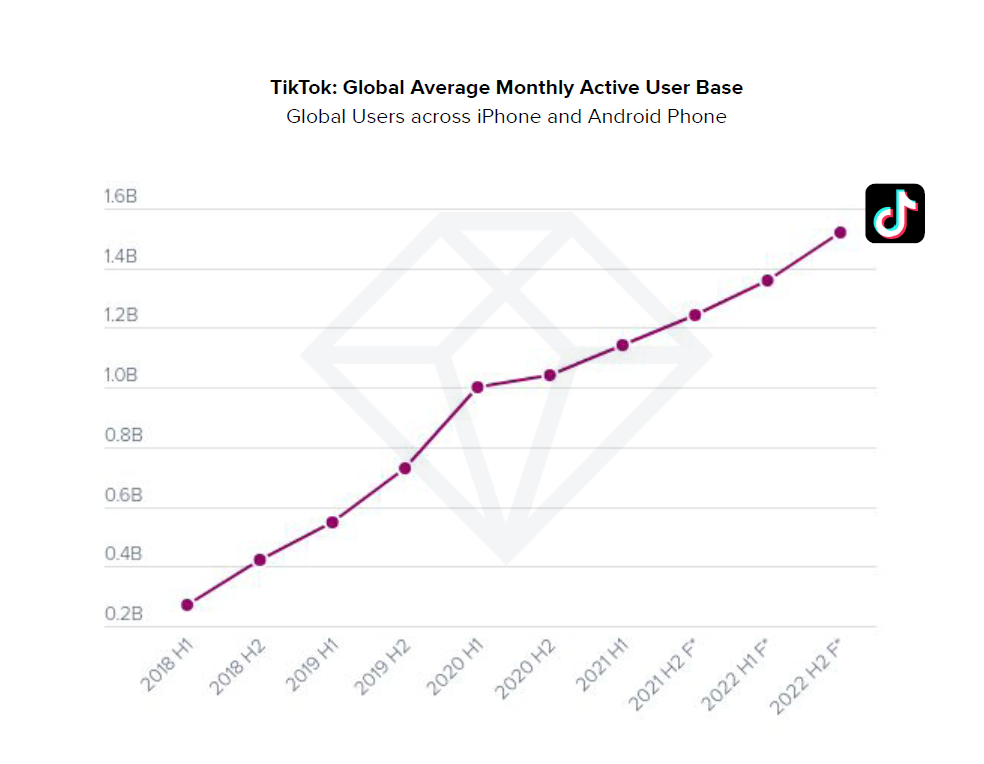 TikTok is expected to surpass 1.5 billion monthly active users in the 2nd half of 2022.  Source: AppAnnie Intelligence 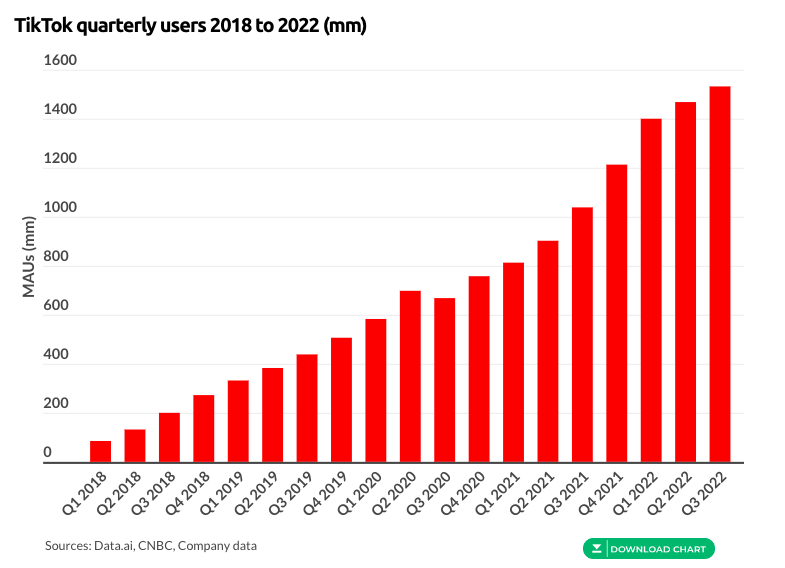 TikTok is available in 155 countries and 75 languages.

As of April 2022, The United States was the country with the largest TikTok audience by far, with approximately 136.5 million users engaging with the popular social video platform. Indonesia followed, with around 99 million TikTok users. Brazil came in third, with 74 million users on TikTok watching short-videos. 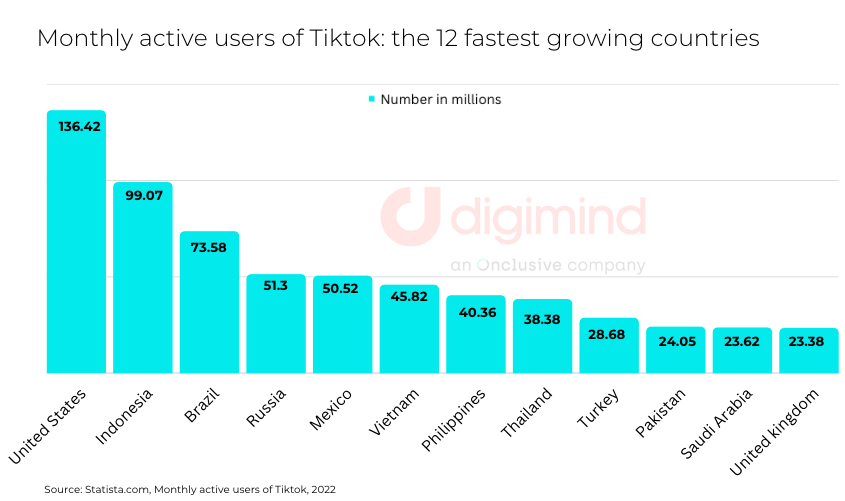 TikTok reached more than 3 billion downloads until this year 2022. It is the most downloaded app (excluding games) in the first half of 2021 with an estimated 383 million first downloads.
TikTok is the first non-Facebook app to reach 3 billion downloads. Indeed, the other four apps that have accumulated more than 3 billion installs since January 2014 are WhatsApp, Messenger, Facebook and Instagram. 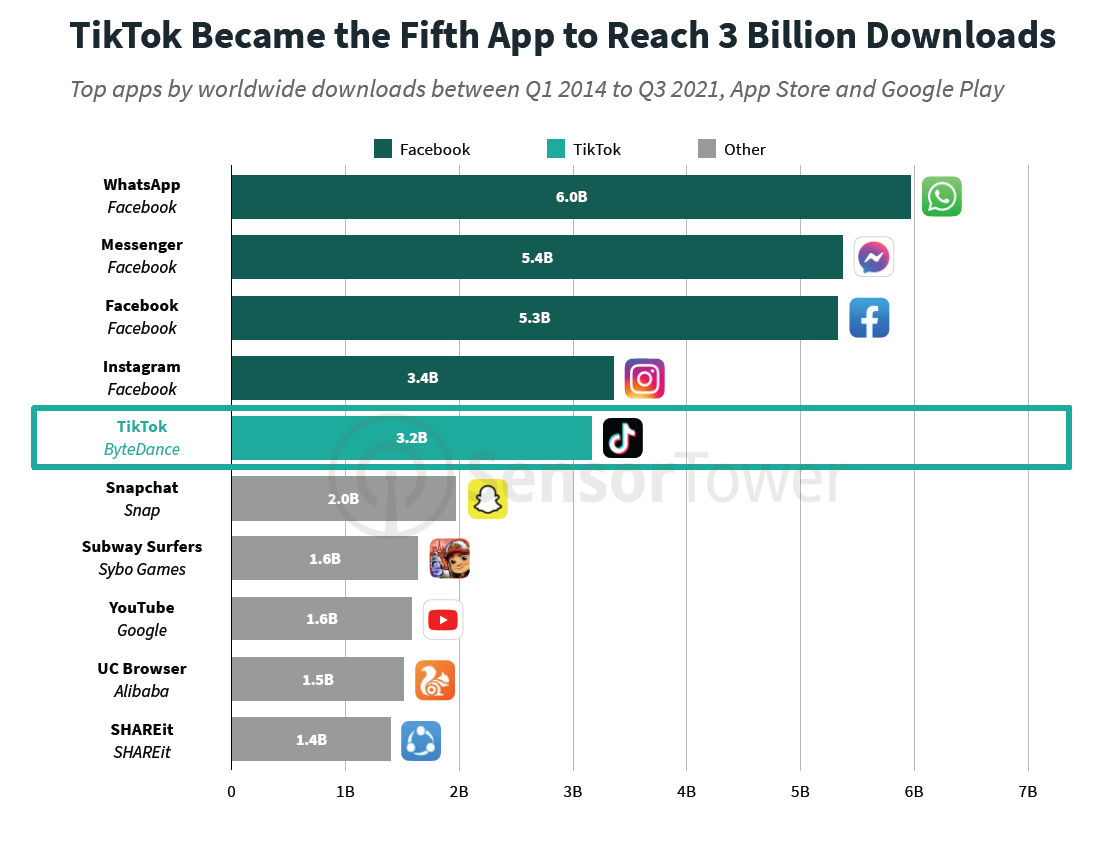 App downloads worldwide since 2014. TikTok is the 5th app to reach 3 billion downloads.

TikTok had surpassed 2 billion downloads as of April 2020. It was the most downloaded app (excluding games) in 2018 and 2019. India accounts for 30.3% of TikTok installations worldwide, generating 611 million downloads to date. The banning of the app from this country will certainly greatly upset these numbers in the future.  China is the second country with 196.6 million to date, or 9.7% of downloads, for its Douyin version. The United States is the third country with 165 million installations, or 8.2%. 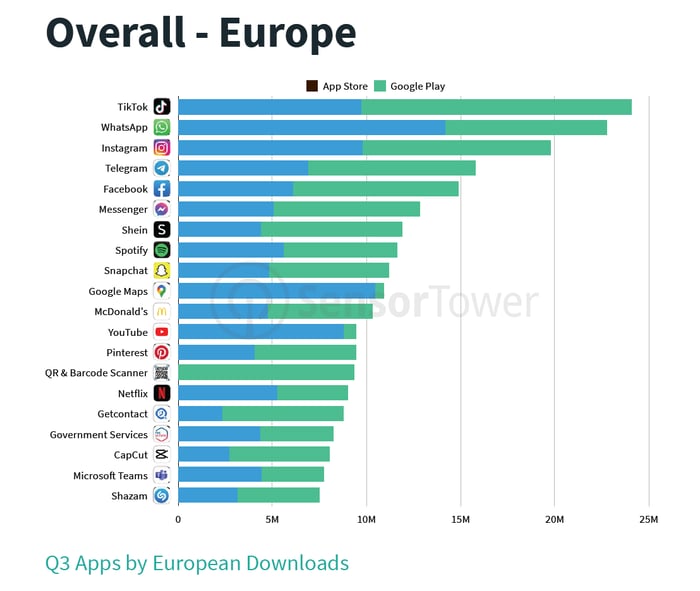 According to Q1 2022 income from the App Store and Google Play, TikTok is not only the most downloaded non-gaming app worldwide, but it's also the most profitable one: 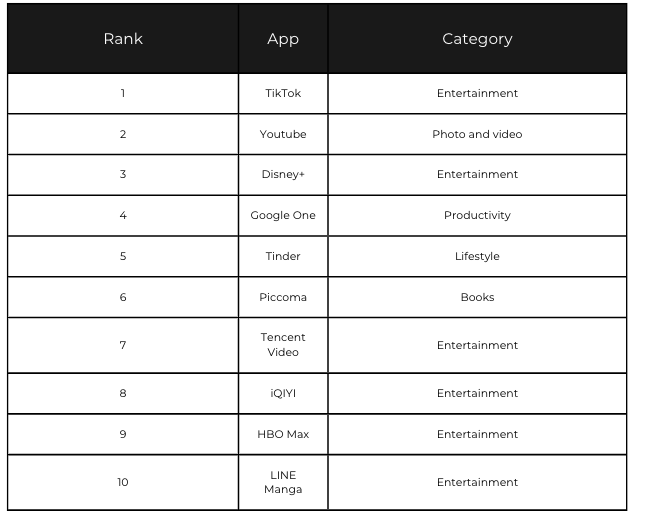 2. Demographics and usages of TikTok Worldwide

Time spent on TikTok in the world

Global users spend an average of 52 minutes per day on the application. 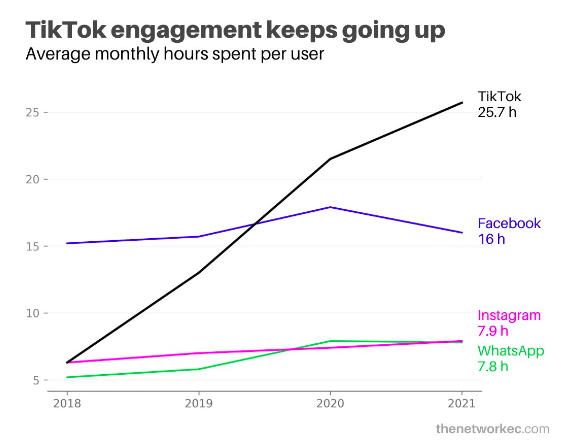 49% of TikTok users reported purchasing a product or service from a brand after seeing an advertisement, promotion or review on the platform.

Engagement is another indicator showing the success of TikTok.  The percentage of monthly users who open the app multiple times per month is over 73%. User engagement in the US has increased over the past year, with frequent users accounting for 22.6% of total users.

3. Most followed Creators and Influencers World

As of July 2020, the most followed content creator on TikTok in the world is dancer and social media influencer Charli D'Amelio with over 73 million followers. She would earn $48199 per post on average. 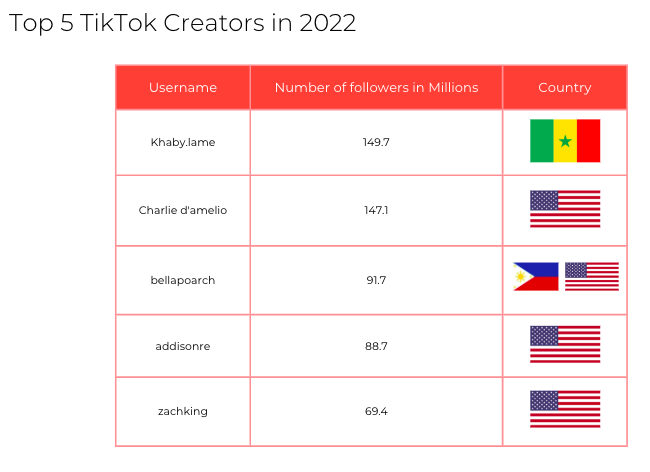 The most followed TikTok influencers in the world.

North American personalities represent the majority of the Top 50 content creators on Tiktok ahead of Indians. 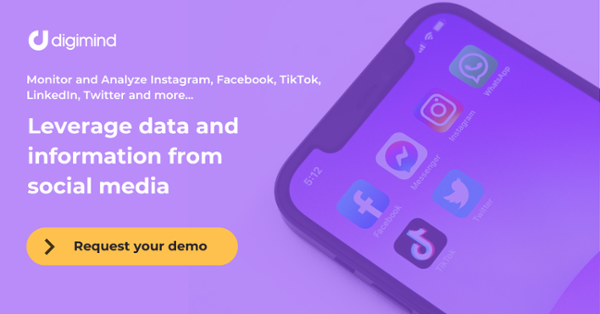