Animal Activists Take Advantage of #SG50 for a Bigger Cause

The dust on SG50 has settled, but we at Digimind Social are constantly keeping one ear on the ground to listen to what’s being said on social media.

Last week, Singapore celebrated her 50th birthday, and social media was abuzz with well wishes for the nation, as well as excitement for the weekend long celebrations. Among the usual fireworks and formation flypast, which have long been the main attractions of Singapore’s National Day, we also noticed something else:

What’s in a hashtag?

It turned out that animal activists had decided to leverage #SG50 to draw attention to the plight of captive dolphins in Resorts World Sentosa (RWS), a family-centric attraction.

#RWSmoments is the official hashtag for the popular tourist destination.

However, these activists had another use for #SG50 and #RWSmoments, tweeting unpleasant remarks about RWS for allowing animal cruelty and captivity, while attempting to provoke Singaporeans to respond: 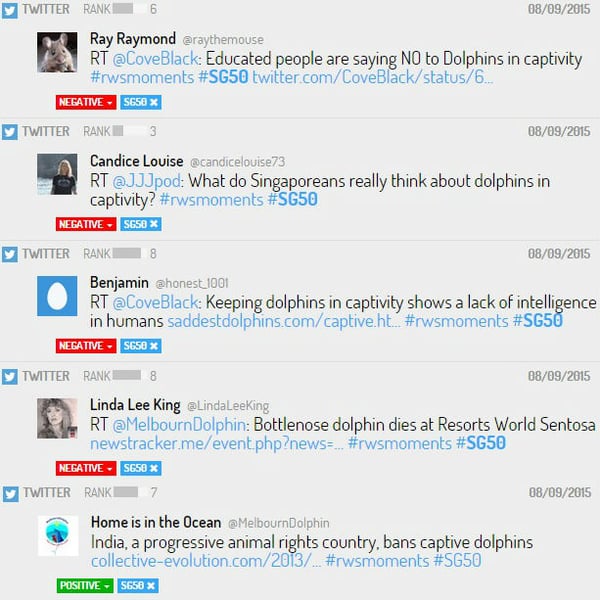 One such group, @MelbournDolphin, tried to lend clout to local animal rights group, Society for the Prevention of Cruelty to Animals (SPCA), by tweeting a YouTube video made in June to plead with RWS to release their dolphins. 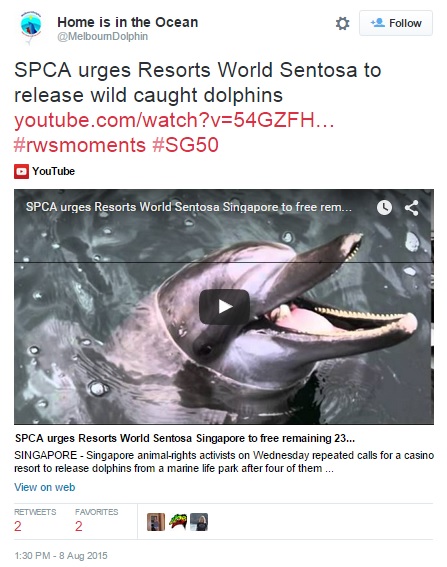 But how big an impact did these animal activists actually make on SG50?

A look at Digimind Social’s influencer snapshot shows that most, if not all of them hail from beyond Singapore. 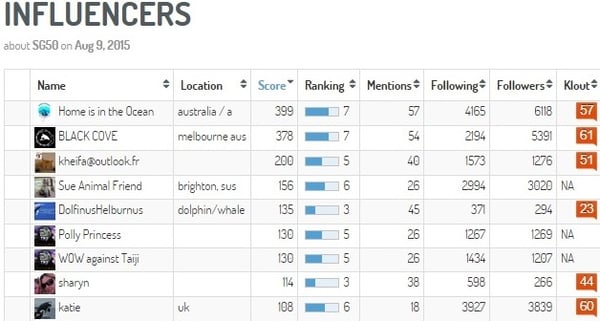 The proximity of groups like @MelbournDolphin (Home is in the Ocean) and @CoveBlack on the influencer map, coupled with re-tweets of each other’s posts indicates that they are banding together for a common cause.

Among them are the Singapore Mums Against Captivity, a group of mothers campaigning against the captivity of dolphins. However, while they are a local group connected to this cause, they are still lacking in clout with only 70 followers.

RWS is not influenced by these groups, either, judging by its isolation on the influencer map.

To trend or not to trend?

Curious to see how #RWSmoments would develop in relation to #SG50 and the dolphins, we monitored it before, during, and after National Day on 9th August.

While it started on 3rd August and gained momentum on 4th August, it tapered off on 9th August itself, having peaked at 1, 067 mentions on 8th August. A sharp drop by 90% followed in the week after National Day.

As was the case for numerous brands this year, SG50 was an opportunity that animal rights groups did not want to miss.

However, these groups did little to sustain the conversation, much less contribute something significant to SG50 as a whole, such as calling for a more humane side to the Singaporean spirit rather than simply using it to highlight the dolphins’ plight, something that many are already aware of in Singapore.

Whether or not these activists can wholly influence the public’s perception of RWS on social media, or push their cause enough to steer the brand toward a more compassionate approach to animals, remains to be seen in the long run.

Build Strategy Social Listening
PREVIOUS POST
#NationalDay2015 At A Glance: A Social Media Listening Perspective
NEXT POST
Checkpoint: What you need to know about Singapore's #GE2015 so far

I’m a marketer by day and a writer and content creator by night. At Digimind, I oversee content and events for the Asia Pacific market. AMA about social media!

Covid-19 Crisis: Helping Those on the Front Line
Paul Vivant May 14, 2020
Asia Pacific’s Key Gaming Personas: Who Are They and How Can You Engage Them?
Melissa Chue Apr 27, 2020
Content is (Tiger) King: An Analysis of Streaming Trends During The Age Of Coronavirus
Micah Levin Apr 22, 2020
8 Awesome Acts of Kindness That Gave Us Hope Amid COVID-19
Micah Levin Apr 2, 2020
5 Reasons Why Messenger Marketing Is Important For Your Brand
Susanne Morris Feb 18, 2020
Previous page
Next page