The first of the presidential #Debates went as one can imagine: highly combative and divisive, and with little substantive discussion on policy. Trump began by blaming Hillary for the nation's security problems, while Hillary fired back with insinuations that Trump has not paid any federal income tax. The candidates sparred over trade, taxes and how to bring good-paying jobs back to the United States; foreign policy and the middle eastern wars were also touched upon.

The consensus seems to be that Trump was on the defensive for the majority of the debate, and that Hillary had an overall more impressive debate performance.

The data we analyzed was gathered from September 21st to September 27th, giving us a total view of the discussion before, during, and immediately after the debate. Certain tweets and data points are notated if they were from the night of the debate, or during the debate specifically.

Let's get into the data by starting with the tweets that gained the largest exposure.

Tweets with the largest audience

These tweets gained the largest audience on the night of the debate, they largely favored Hillary Clinton: 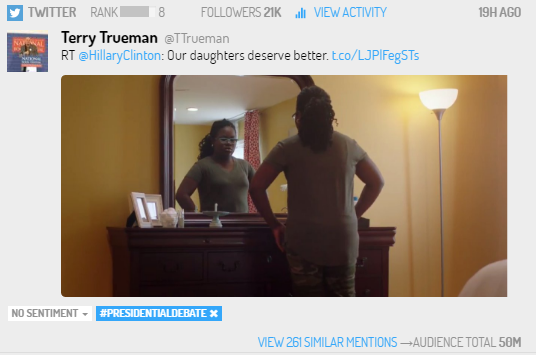 Mention with the largest audience

Yahoo's article posted the day after the debate was the mention with the largest audience, potentially reaching almost 100 million people.

While the political lines were sharply divided, there were many people who wished that neither of these two candidates were on the debate stage. The tweet below had over 1,500 mentions similar to it, proving that there are many individuals not interested in either candidate.

We see that Hillary Clinton had a larger audience viewing mentions with a positive sentiment. When compared to Trump over the course of the debate, she had 3% of her audience seeing a positive mention regarding her. In a battle between two strongly disliked candidates - appearing even slightly more likable than your opponent is critical.

What were people talking about?

We see that the key concepts regarding both Clinton and Trump are quite similar, each candidate has a sensitive issue appear in their top 10 key concepts. For Trump it was Alicia Machado, the former Miss Universe whom Trump allegedly called "miss piggy". Clinton's weak spot was Benghazi, a controversial issue where Clinton's incompetence allegedly caused the deaths of four Americans in Libya, including the U.S. ambassador.

Who had the larger audience?

Donald Trump edged out Hillary Clinton with 53% of the total audience. However with the high negative sentiment of the tweets for both candidates, neither should be comfortable with their position. 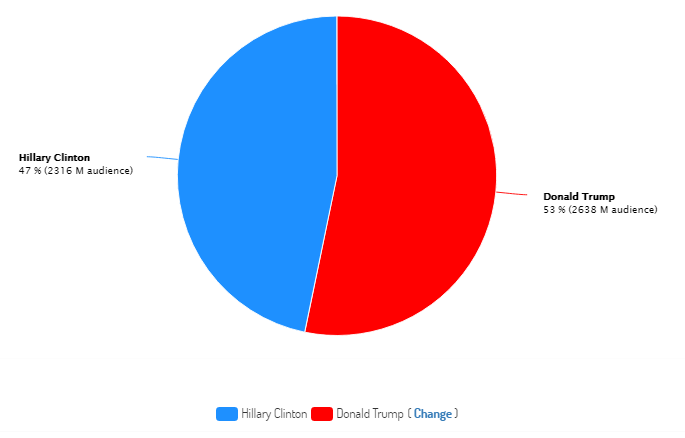 "Jobs" was the #1 issue based off of audience size on Twitter regarding Hillary Clinton during the debate, followed closely by both "Stamina" and "Qualified".  While jobs is has been a hot topic in recent years, the stamina issue is uniquely Hillary's, as Donald Trump has raised questions regarding her physical health, and capability to handle the stress of the presidency. 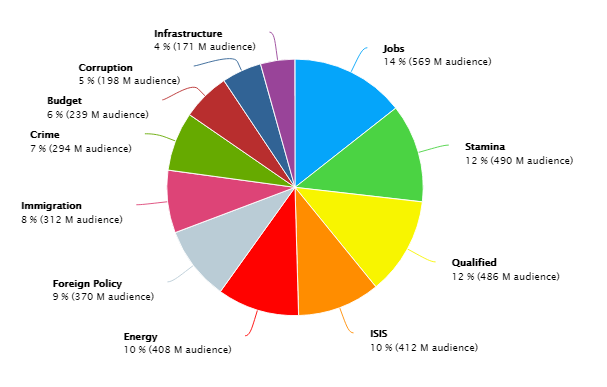 The top issues regarding Donald Trump on debate night were similar to Hillary's, although the context differs - Donald was on the attack on topics such as "Stamina", and even on the subject of "Qualified" saying that Hillary has experience, but that it is "bad experience".

Demography of those mentioning Hillary Clinton

Demography of those mentioning Donald Trump

Trend of audience size over time

With Hillary Clinton taking the win in this first presidential debate, we can anticipate a strong reaction form Trump in the next one which is scheduled for Tuesday, October 4, 2016.

Three more debates are yet to come, providing more data to analyze, and potential insights to discover.