Just this past Tuesday, Bretibart declared war on Kellogg's major cereal brand. The latter pulled the trigger on their advertising campaign with Breitbart, stating that the media outlets values are not aligned with the brand's. Previously, Breitbart was accused for publishing racist, sexist, and anti-semitic content.

Check out the full statement below by Kellogg spokeswoman Kris Charles.

"We regularly work with our media buying partners to ensure our ads do not appear on sites that aren't aligned with our values as a company," said Kris Charles, a spokeswoman for Kellogg. "This involves reviewing websites where ads could potentially be placed using filtering technology to assess site content. As you can imagine, there is a very large volume of websites, so occasionally something is inadvertently missed."

President-elect Donald Trump selected former Breitbart chairman, Steve Bannon, as one of his top aides. Trump has defended Bannon against accusations that the website is promotes racism and sexism.

With the American election just wrapping up a few weeks ago, we thought it would be interesting to know what is being said on social media about Kellogg's crisis.

Digimind Social launched a topic on Wednesday, November 29, when the crisis broke out, and collected data on different media outlets and social media platforms until Wednesday, December 7.

#Dumpkelloggs is the official hashtag that is being used by Breitbart’s campaign and online petition against the Kellogg's brand, so it should come as no surprise that it is showing up in the key concepts on social media.

#Boycott is another key concept that trended on social media during this crisis. Breitbart’s campaign called for Americans to stop purchasing Kellogg’s products and boycott the brand. What’s interesting here is that the civil rights movement, “Black Lives Matter” also trended within the conversation of this crisis. This movement has been ejected into the conversation around #DumpKelloggs.

Let’s take a look at who the main contributors are in the dialogue around the hashtags #BlackLivesMatter and #DumpKelloggs.

Key concept “clusters” showing the relationship between most used words and hashtags.

Looking at which media outlets are contributing and reporting on the issue of Kellogg's is extremely important in this case. If we look at top influencers by their audience reach, and compare it on both Facebook and Twitter, the type of influencer profile is vastly different on either platforms. Have a look:

Top Influencers on Facebook showing a majority of media outlets and brands as leading the conversation.

On Facebook, the main contributors and top influencers of the conversation are brands and news outlets on their Facebook pages. On Twitter, this is very different. The top influencers are actually individuals, who happen to have a large audience. The contrast between a company’s key messaging and objective news reporting, versus individual opinion is a key indicator of who is leading the conversation. It’s important to note that Twitter mentions are actually higher than Facebook.

What does this mean? It means that public opinion on Twitter is currently dominating this conversation online.

Top influencers on Twitter showing a majority of individual opinion leaders at the forefront of the conversation.

What Does This Mean For Kellogg's?

Using a social media monitoring tool to dissect the relationships of key concepts with top influencers and different platforms is extremely insightful for a brand. Being able to analyze both qualitative and quantitative insights embedded within audience conversations can help a brand or company navigate their own key messaging.

Based on the data collected what may be the most interesting of all is looking at where exactly these conversations are happening in America. To take it one step further, comparing these geographic locations with the states that voted for President Donald Trump would give further insight into how Kellogg’s can develop a strategy as their brand reputation is now becoming translated into political sentiments. Let’s have a look at the geographical hot spots: 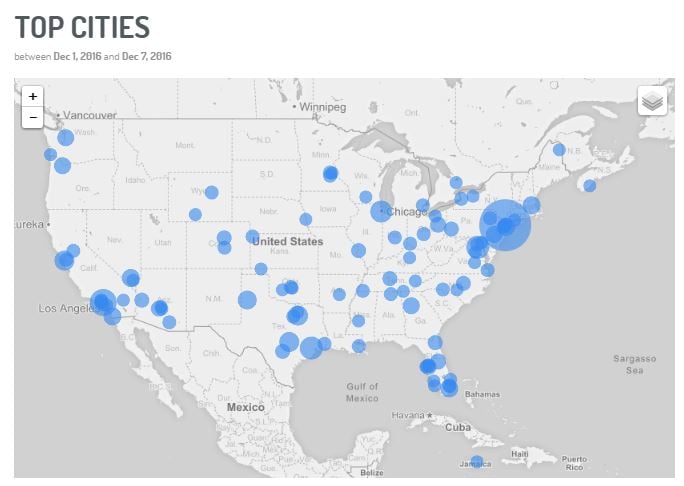 A screenshot of Kellogg's as an influencer, on the left show who Kellogg’s is influencing and on the right, who is being influenced by Kelloggs’s.

What is most interesting is that Kellogg’s has not contributed to this conversation at all in our data. This "voice-less" strategy will be interesting to see how it plays out for the brand as the online conversation continues. It also poses the question of who exactly are these key influencers speaking to? If there is no engagement from the brand on key topics, it is possible that the conversations may be “preaching to the converted” so to speak.