3 Metrics to Track, Predict and Measure the Real Impact of a Brand Crisis

In the age of social media where discussions can occur and develop across borders, a brand crisis can spread like wildfire. How your brand responds during and after a crisis can either repair or significantly damage brand reputation both in the short and long run. Closely monitoring metrics such as volume of conversation over time, as well as how your customer sentiment evolves throughout the course of said crisis, is crucial in helping brands calibrate responses in real time.

Social media listening allows you to detect early warning signs of a potential crisis, understand the impact of the situation, and take necessary and purposeful actions to protect and mend your brand’s reputation.

Using the example of United Airlines’ recent crises, we will consider three crucial metrics to examine, to track and manage the impact of a crisis on your brand reputation:

An abnormally high volume of conversations surrounding brand is a tip-off to an impending crisis or incident that is gaining traction on social media.

To fully understand what triggered this unexpected spike in discussions, and how it developed over time, marketers can analyze the following:

By monitoring discussions surrounding the airline in February and March, we identified two significant spikes. Each lasted for about one week before the conversations eventually fizzled out.

The first spike can be attributed to United Airlines’ (UA) announcement on February 24, that it was to end its partnership with the National Rifle Association (NRA), in response to growing calls from gun-control advocates following the mass shooting in Florida earlier that month. This bold move by United was highly contested by advocators for gun rights; internauts found it hypocritical of United to advocate gun control, while  continuing to donate to Planned Parenthood, the largest abortion provider in the United States.

Within two weeks of the NRA crisis, on March 12, a pet dog was reported to have died on a UA flight, after a flight attendant insisted on placing it in an overhead compartment. Furthermore on March 14, UA mistakenly flew a Kansas bound German Shepherd to Japan. Both incidents sparked outrage worldwide.

Considering the short time span in which both crises occurred, it would be important for UA to closely track whether discussions from the first crisis were still trending, as well as determine if the second spike was related to the first incident so their crisis team could respond accordingly. I the case of dog crisis, the incident occured on March 12, but was reported by news channels a day later, causing UA related conversations to peak.

Brands can pre-set alerts on their social listening dashboard, to automate notifications of such scenarios, that are most likely to be triggered by an event of development. For example, an alert can be set to send notifications to a brand’s corporate communications team should there be more than 1000 posts in any given hour.

Looking at sentiment, is key to determining whether the spikes in brand related discussions are triggered by a well received campaign or an outstanding customer experience that has gone viral, or a complaint or negative incident that your brand needs to rectify.

To get an in depth of understanding of your brand sentiment and what it means, you should:

To get a more holistic view of your brand’s reputation, you can also benchmark yourself against competitors, to see where you truly stand in terms of consumer perception. If your brand ranks comparatively worse in this aspect, it’s a sign that it has been impacted negatively by the crisis, and your public relations (PR) team should definitely respond.

Digimind Social chart displaying a brand’s sentiment against its competitors.

Bonus: Check out our guide on unlocking and analyzing customer opinions on social media!

With an average of over 60 million emojis being sent everyday on Facebook, emojis are a crucial aspect of the way we communicate with our friends, and talk about different trends and brands

Emojis are subject to one’s interpretation and hence are not as straightforward as they may seem. Therefore you should not only look at the top emojis used, but also analyze how they are being used. This is important for determining how exactly people are talking about your brand.

The top trending emojis during the second United Airlines crisis, were used to emphasize criticism directed at the airline. 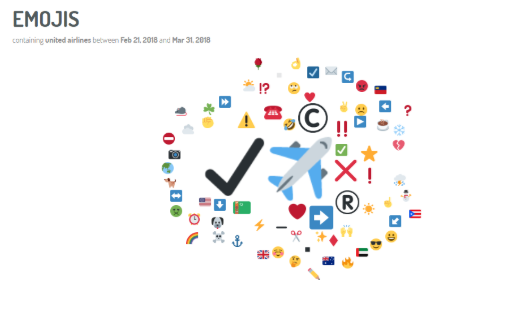 Although the Tick emoji usually has a positive connotation, we can see that it actually represents check marks for the things UA did wrong, including past fiascos involving the forced ejection of a passenger last year. Internauts also used the Tick to call for others to share their negative views on Twitter.

✔RETWEET✔ if you're BOYCOTTING United Airlines who first announced to America they hate people who want to protect themselves, now they are murdering dogs on flights!! I predict they will be out of business within 12 months. Let's help that process along. #MAGA #NRA #SpaceForce pic.twitter.com/UnRrGTB4ps

This is animal cruelty. #UnitedAirlines

Tracking Your Brand’s Reputation After A Crisis

Internauts rarely ‘forgive and forget’, and in this digital age, new incidences can inadvertently bring to mind past wrongdoings by a brand. Recovering consumer perception, is important in preserving your brand’s standing with customers in the long run.

It is important to continue monitoring the crisis’ impact after the initial wave of discussions has tapered off. Consumer sentiment analysis can help brands calibrate post crisis strategies, by:

See how social listening can help you track your brand reputation, customer perception, and more in real time.

With a background in marketing and psychology, Sophia loves to analyze and understand consumer behaviour through observations and data. After hours you’ll find her practicing yoga or baking sourdough.